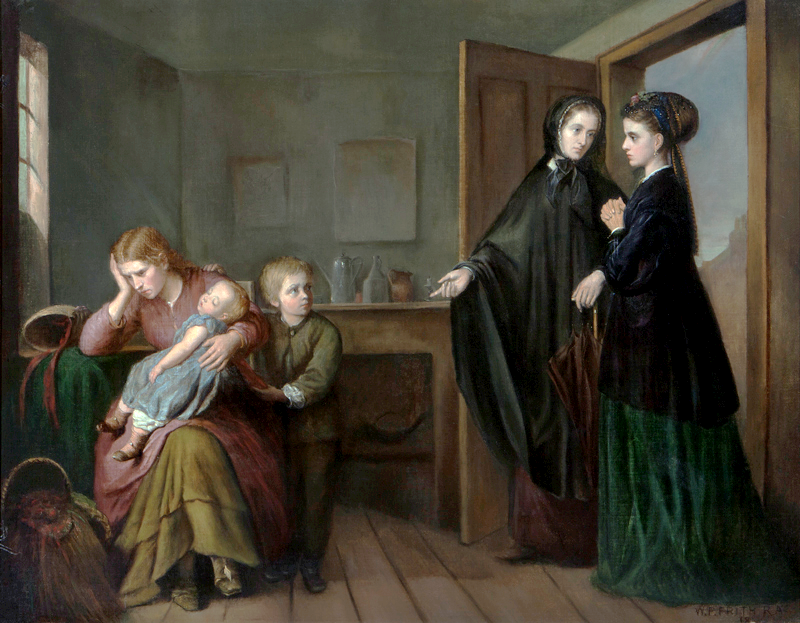 William Powell Frith (19 January 1819 – 9 November 1909), was an English painter specializing in genre subjects and panoramic narrative works of life in the Victorian era. He was elected to the Royal Academy in 1852. He has been described as the “greatest British painter of the social scene since Hogarth”.

Born in Aldfield, North Yorkshire, Frith was encouraged to take up art by his father, a hotelier in Harrogate. He moved to London in 1835 where he began his formal art studies at Sass’s Academy in Charlotte Street, before attending the Royal Academy Schools. Frith started his career as a portrait painter and first exhibited at the British Institution in 1838. In the 1840s he often based works on the literary output of writers such as Charles Dickens, whose portrait he painted, and Laurence Sterne.

He was also a member of The Clique, which also included Richard Dadd. The principal influence on his work was the hugely popular domestic subjects painted by Sir David Wilkie. Wilkie’s famous painting The Chelsea Pensioners was a spur to the creation of Frith’s own most famous compositions. Following the precedent of Wilkie, but also imitating the work of his friend Dickens, Frith created complex multi-figure compositions depicting the full range of the Victorian class system, meeting and interacting in public places. In Ramsgate Sands, Life at the Seaside (1854) he depicted visitors and entertainers at the seaside resort. He followed this with The Derby Day, depicting scenes among the crowd at the race at Epsom Downs, which was based on photographic studies by Robert Howlett. This 1858 composition was bought by Jacob Bell for £1,500. It was so popular that it had to be protected by a specially installed rail when shown at the Royal Academy of Arts. Another well-known painting was The Railway Station, a scene of Paddington station. In 1865 he was chosen to paint the Marriage of the Prince of Wales.

Detail of After the Bath, a late nude by Frith
His 1858 painting The Crossing Sweeper has been described as breaking “new ground in its description of the collision of wealth and poverty on a London street.”[3]

Later in his career he painted two series of five pictures each, telling moral stories in the manner of William Hogarth. These were the Road to Ruin (1878), about the dangers of gambling, and the Race for Wealth (1880) about reckless financial speculation. He retired from the Royal Academy in 1890 but continued to exhibit until 1902.

Frith was a traditionalist who made known his aversion to modern-art developments in a couple of autobiographies – My Autobiography and Reminiscences (1887) and Further Reminiscences (1888) – and other writings. He was also an inveterate enemy of the Pre-Raphaelites and of the Aesthetic Movement, which he satirised in his painting A Private View at the Royal Academy (1883), in which Oscar Wilde is depicted discoursing on art while Frith’s friends look on disapprovingly. Fellow traditionalist Frederic Leighton is featured in the painting, which also portrays painter John Everett Millais and novelist Anthony Trollope.

Frith lived a curious domestic life – married to Isabelle with twelve children, whilst a mile down the road maintaining a mistress (Mary Alford, formerly his ward) and seven more children – all a marked contrast to the upright family scenes depicted in paintings like Many Happy Returns of the Day. Frith married Mary on the death of Isabelle in 1880.[4] In his later years he painted many copies of his famous paintings, as well as more sexually uninhibited works, such as the nude After the Bath. A well-known raconteur, his writings, most notably his chatty autobiography, were very popular.

In 1856 Frith was photographed at “The Photographed Institute” by Robert Howlett, as part of a series of portraits of “fine artists”. The picture was among a group exhibited at the Art Treasures Exhibition in Manchester in 1857.

He is buried in Kensal Green Cemetery, London W10.