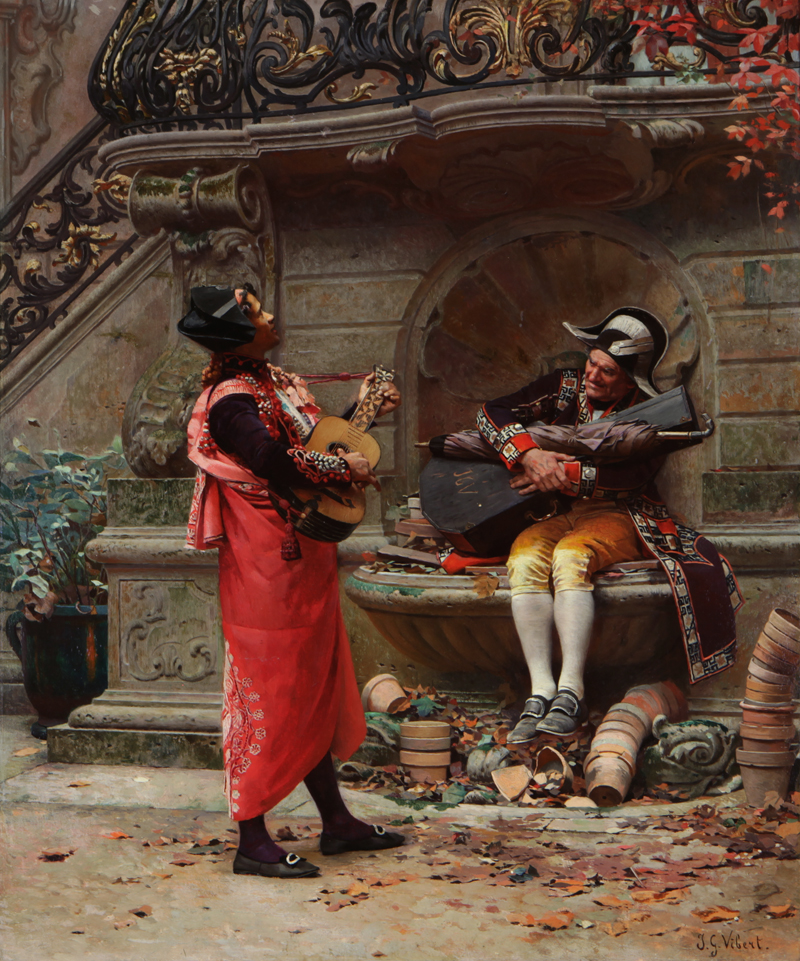 Vibert was an Officer of the Legion of Honor and one of the most sought after atelier masters at the Ecole des Beaux Arts. He was a witty French Academic painter who exercised his artistic freedom by poking fun at human foibles, mocking greedy government, and challenging hypocritical clergy. Images that would have led to imprisonment a decade earlier were viewed as a part of the growing democratization of Europe and made him a much-admired artist in his native country as well as in America. Here, we see a lighthearted image of a young musician staring longingly at the balcony above while his companion, crammed into a planter, waits for the sentimental folly to end — perhaps a commentary on the foolishness of sloppy gestures of love.

Vibert painted a partner piece – Translated title: Why Comes He Not ? Both The Serenade and Why Comes He Not ? were featured in a traveling exhibition called Cavaliers and Cardinals: Nineteenth Century French Anecdotal Paintings that was curated by Eric M.Zafran along with a full color catalog published by the Taft Museum in Cincinnati. It went to 3 museums, including the Corcoran Gallery of Art in Washington and the Arnot Art Museum in Elmira New York between June 25, 1992 and January 17, 1993.

In describing Jehan Georges Vibert, an admirer of his wrote this: “One of the most original artists that Le Roux introduced to me is Vibert [.] He is middle-sized, stout for his age, — for he seems only thirty-five, — has a full, merry, happy, but very shrewd, sensible face; he loves work, and is, as are all these men, an indefatigable, untiring worker, but he loves also to take his play-hours. In the evening he goes to the, theater, and among his friends and himself removes his thoughts from his work and his studio.”[1]The cheerfulness, playfulness, and hint of shrewdness she describes in Vibert’s character are traits that would also distinguish his works and make his reputation.He was born on September 30th , 1840 in France. In his early years he was trained under Barrias and on April 4th, 1857, entered the Ecole des Beaux Arts. During the early part of his career he painted rather serious and dramatic subjects, such as “The Death of Narcissus” and “Christian Martyrs in the Lion pit.”[2] He entered the Salon in 1863; found his first success with a medal at the 1864 salon, and won a financial prize at the universal exposition of 1867.Around 1867, however, his style changed and instead of the dramatic and serious, he started painting “small things and niggling.”[2] Instead of heroic Christians and tragic mythology, he turned to more homey subjects such as The Barber of Ambulart.In 1870, while Paris was under siege to the Prussians, Vibert fought and was wounded at the battle of Malmaison. His courage, though, earned him the honor of being made a Knight of the Legion of Honor.Though he was himself a hero, his growing attraction to the less serious subjects of genre did not ebb. Instead, it was stimulated by his interests in comedy and satire. Not only did he enjoy taking a break from work to go out to plays, but he also wrote several comedies, many of which were successfully produced at Paris theaters such as the Vaudeville. As well as from his own comedies, he gathered subject matter from the French fabulist Lafontaine (of whom he had a bust in his house)[1], and the satirist Jonathan Swift.In 1878 he achieved his first popular success with a huge history painting. “The Apotheosis of Mr. Thiers” was the talk of Paris even before it was completed.[1] However, in spite of the success of this painting, he would spend most of his creative time on the humorous scenes that he enjoyed.During the later part of his life, his interest turned to the clergy.[1] Paintings such as The Fortune Teller, The Diet, and Monk picking radishes satirized the clergy’s irreligious indulgences or depicted them in homey situations to an audience used to seeing the church ennobled in traditional religious and historic works. These would be the paintings that would make his reputation.In 1882, he was promoted to Officer of the Legion of Honor, for his painting this time. This growing reputation would make him one the the most sought after atelier masters at the Ecole des Beaux Arts. This would lead him to being one of the seven most influential artists of his time, along with Bouguereau, Cabanel, Meissonnier, Gérôme, Bonnat, and Lefebvre.[3]He died suddenly of heart disease on July 28th 1902.Looking at his satiric work of the clergy in a broader historical context, one can detect that they are “representative of the liberties emmanating from Enlightenment thinking that led to the world and culture shifting events of the American and French Revolutions. To spoof the clergy,” as ARC Board Chairman, Fred Ross, explains “would have been to risk your life or imprisonment a century earlier, or even currently in Rome where Papal power was still at great strength.””Thus Vibert was part of the growing democratization of Europe in which the artists and writers of the time were exposing the fraud and pomposity of big government and a hypocritical clergy that talked about walking in the shoes of the fisherman, and giving for god all worldly goods, while they themselves lived in the height of oppulance and luxury in great mansions with servants waiting on their every whim.”

“The Fortune Teller (Tireuse des Cartes) is a particularly powerful example. What could be a greater spoof on holier-than-thou clerics, than to have two Cardinals soliciting the services of a prognosticator.” In a late ninteenth century society that was still bearing the fruit of the Enlightenment, it is no wonder that Vibert’s wit and satire could flourish and be valued.

In 1902 an important technical book was published by Vibert call La Science de la Peinture. Very hard to find, this book is one of several from the period that is widely sought by contemporary realists who are trying to resuscitate the techniques and accomplishments of the past, so that future creativity and experimentation can be built on the solid foundation of the masters.

“His works are in the collections of many major and minor museums including: Bordeaux, Brooklyn, Buffalo, Chicago, Cincinnati, Glasgow, Melbourne, New York, Rochefort, Saint Louis, Troyes, Versailles and Washington D.C. He was recently one of several featured artists (including 30 of is works) in a traveling exhibition called Cavaliers and Cardinals: Nineteenth Century French Anecdotal Paintings that was curated by Eric M.Zafran along with a full color catalog published by the Taft Museum in Cincinnati. It went to 3 museums, including the Corcoran Gallery of Art in Washington and the Arnot Art Museum in Elmira New York between June 25, 1992 and January 17, 1993. His paintings can be found in many important private collections, including three works in that of the [ARC] Board Chairman and his wife, Fred and Sherry Ross.” (FR)