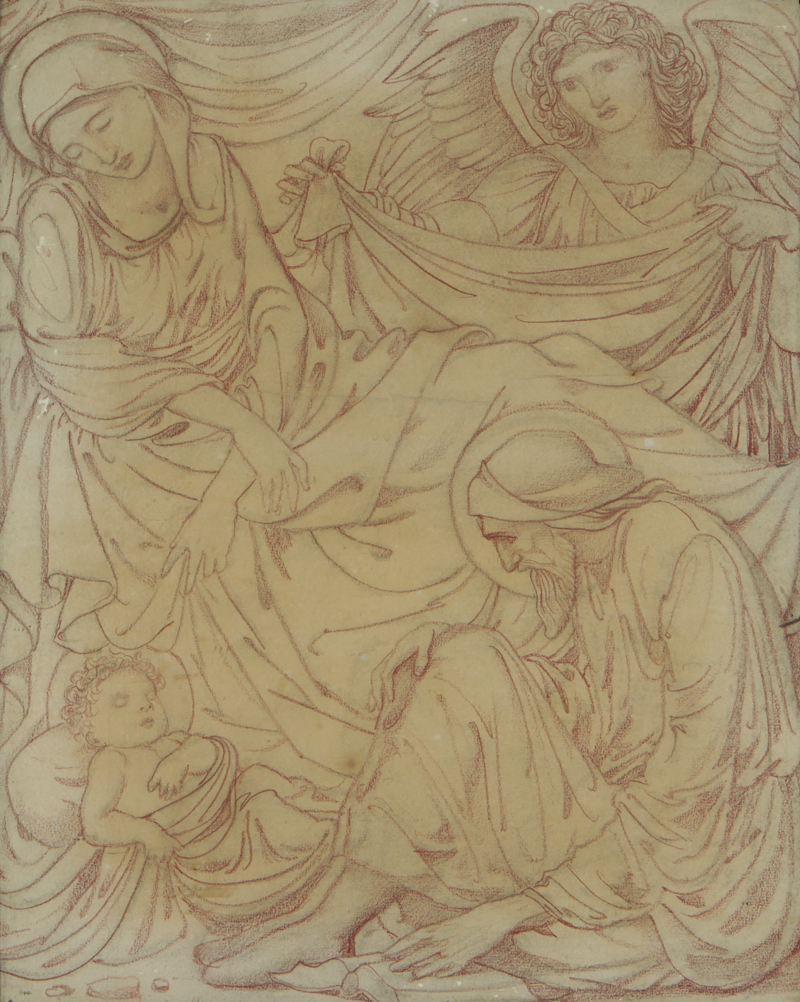 Cartoon for stained glass panel at Jesus College Chapel at Cambridge, designed by Edward Burne-Jones, made by William Morris.

Sir Edward Coley Burne-Jones was a British painter and designer associated with the later phase of the Pre-Raphaelite movement. He was born in Birmingham and quite early in his life it was discovered that he was quite gifted at drawing. In 1853 he went to Exeter College in Oxford, where he met William Morris, who was to become his lifelong friend and an associate in a number of decorative projects.  He and Morris left Oxford before graduating and started their artistic careers under Dante Gabriel Rossetti, one of the founders of the Pre-Raphaelite Brotherhood.

Burne-Jones’s early paintings reveal the heavy influence of the Pre-Raphaelite movement, but by the 1860’s he discovered his own artistic style. Moving away from the Pre-Raphaelite premise that all art should be valued by its potential to change society, he started to accept the idea that art is an object of beauty, which should stimulate a sensual response, not a moral reaction. While his paintings no longer reflected the ideals of the early Pre-Raphaelites, his decorative work remained true to the style and tradition The Brotherhood.

Buren-Jones worked closely with his friend William Morris and in 1861 helped him establish the decorative arts firm of Morris, Marshall, Faulkner & Co. The firm was involved in designing and manufacturing stained glass, metalwork, mosaic tiles, wallpaper, tapestries, and carpets. The decoration of churches was an important part of their business, and Burne-Jones spent much his time at the firm designing stained glass windows for numerous churches throughout the UK. In fact, the rejuvenation of the tradition of stained glass art can be attributed to Burne-Jones.

Two significant secular commissions helped establish the firm’s reputation; one at St. James’s Palace and another at the South Kensington Museum (now the Victoria and Albert). Both projects featured stained glass windows designed by Burne-Jones. He was also responsible for designing the windows at the Christ Church Cathedral, as swell as several other buildings in Oxford.

In 1881 Burne-Jones received an honorary degree from Oxford, and was made an Honorary Fellow in 1882.In 1885 he became the President of the Birmingham Society of Artists or RBSA, a highly influential art institution in the later Victorian period. It’s about this time that Burne-Jones began hyphenating his name to avoid being lost in the mass of Joneses.

In 1885, Burne-Jones was elected an Associate of the Royal Academy (A.R.A.) and the following year he exhibited (for the only time) at the Academy. In 1893, he formally resigned his Associateship. That same year he was approached to see if he would accept a Baronetcy. Reluctantly he accepted the honor, and in 1894 he was formally named 1st Baronet. Burne-Jones continued to cast his artistic net widely until the end of his career. In addition to painting, he designed ceramic tiles, jewelry, tapestries, stage costumes, and illustrated books. He executed 87 wood cut designs for the Kelmscott Press edition of Geoffrey Chaucer (1896), considered one the world’s finest printed books.

Cartoon is for the bottom center panel, depicting Matthew, the evangelist, flanked by Sybils.