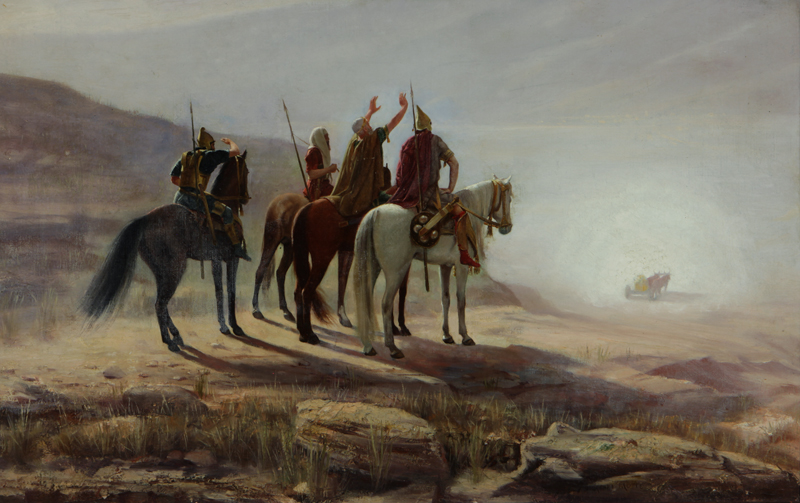 Henri Motte was an award-winning student of Jean-Léon Gérôme who exhibited at the French Salons for most of career. He also exhibited Taking of the Tuileries, 10th August 1792 (1892) at the Chicago World’s Fair of 1893.

Motte specialized in historical and mythological scenes, such as The Trojan Horse (1874), his first Salon entry; Hannibal Crossing the Rhone (1878); and Vercingetorix Surrendering to Caesar (1886) — all depictions of compelling moments of warfare. Vercingetorix Surrendering to Caesar and Hannibal Crossing the Rhone both received medals at the Universal Exhibition in Paris. Another award-winning image, Cardinal Richelieu at the Siege of La Rochelle (1881), depicts Cardinal Richelieu, on behalf of King Louis XIII, commanding a siege on the city of La Rochelle, then occupied by the Huguenots.

Motte received a third class medal in 1880, the Bronze Medal at the Paris Exposition in 1889, and the Silver Medal at the Paris Exposition in 1900. He was also awarded the Chevalier de la Légion d’Honneur (Knight of the Legion of Honor) in 1892.  The Order of Légion d’Honneur is the highest decoration in France and is divided into five degrees: Chevalier (Knight), Officier (Officer), Commandeur (Commander), Grand Officier (Grand Officer) and Grand Croix (Grand Cross).

Motte was commissioned to decorate the theatre at Monte Carlo and the Town Hall of Limoges. More recently, his 1886 painting of Vercingetorix Surrendering to Caesar was used as the cover artwork for the modern-day board game, Caesar in Gaul.