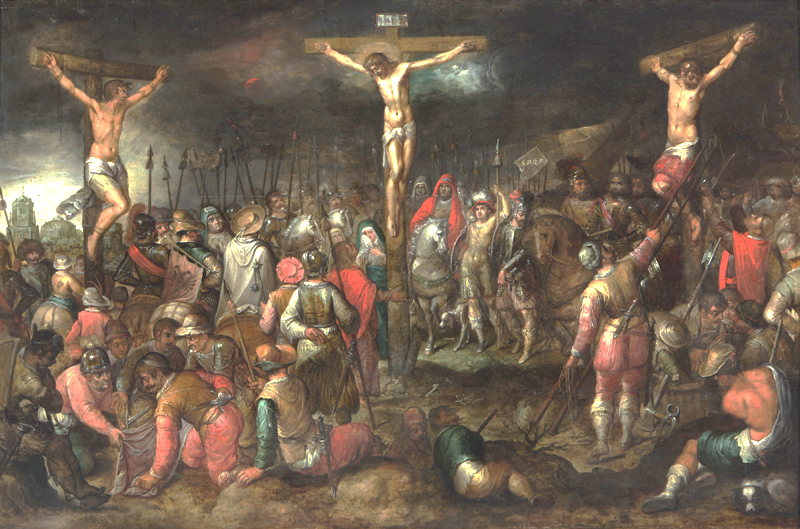 During the 16th and 17th centuries the Francken family of Antwerp had three generations of painters with the same Christian names of Frans, Hieronymous, or Ambrosius. At the time, this was an effective sales method for ensuring continuity of the family business; but today, it makes it difficult to classify the paintings. When Frans I’s son, Frans II, began to sign paintings “the younger,” Frans I began to describe himself as “the elder.” But this happened again in the next generation when Frans II’s son Frans III reached adulthood; Frans II took the name of “the elder” and Frans III adopted that of Frans “the younger.”

Hieronymus Francken I was a Flemish painter born and an important member of the Francken family of artists. He initially studied under Frans Floris, a Flemish history painter, to whom he later served as an assistant. In 1560, Hieronymus Francken I travelled to Paris, and in 1566 he became one of the masters employed to decorate the Palace of Fontainebleau.

For a short period (c. 1574) Hieronymus Francken I returned to Antwerp to finish the “Adoration of the Magi,” which had been left unfinished by his teacher, Frans Floris, when he died in 1570. In 1578, Hieronymus Francken I moved back to France, dividing his time between Paris and Fontainebleau. In 1594, he was appointed the court painter to Henry III of France, who had just returned from Poland. Hieronymus Francken l continued to paint until his death in 1610. Over the years his paintings style evolved into an elegant Mannerist style, which had a powerful influence on the next generation of Francken Family painters.

In 1527, after two years of captivity under the Emperor Charles V, Francis I regained his thrown and once again ruled as king of France. From his thrown he launched an aggressive campaign to restore a small, dilapidated hunting lodge southeast of Paris, known today as Fontainebleau. Starting in 1530, an unprecedented number of talented artists, architects, and artisans, primarily from Italy, were lured to Fontainebleau. Collectively they transformed a decaying country château into grand royal palace. Although originally made up of Italian artists, the second wave of artists to flock to Fontainebleau (1595 -1610) were largely Flemish and French artists. These artists brought with them the prevailing Mannerist style developed by painters such as Pontormo, and influenced by both Raphael’s and Michelangelo’s later works.

Mannerism originated in Italy around 1520 and eventually spread through much of Europe, lasting until approximately 1590. It originated as a reaction to the classicism and the idealized naturalism of High Renaissance art, as practiced by Michelangelo and Raphael in the first two decades of the 16th century. However, we see Mannerist elements  in Raphael’s later paintings done in Rome and in Michelangelo’s huge fresco “The Last Judgment” (1533–41; Sistine Chapel, Vatican). Mannerism tends to have compositional tension and instability, rather than the contrived balance of earlier Renaissance painting. The figures in Mannerist works frequently have graceful but oddly elongated limbs, small heads, and stylized facial features, and their poses are often complex and artificial.