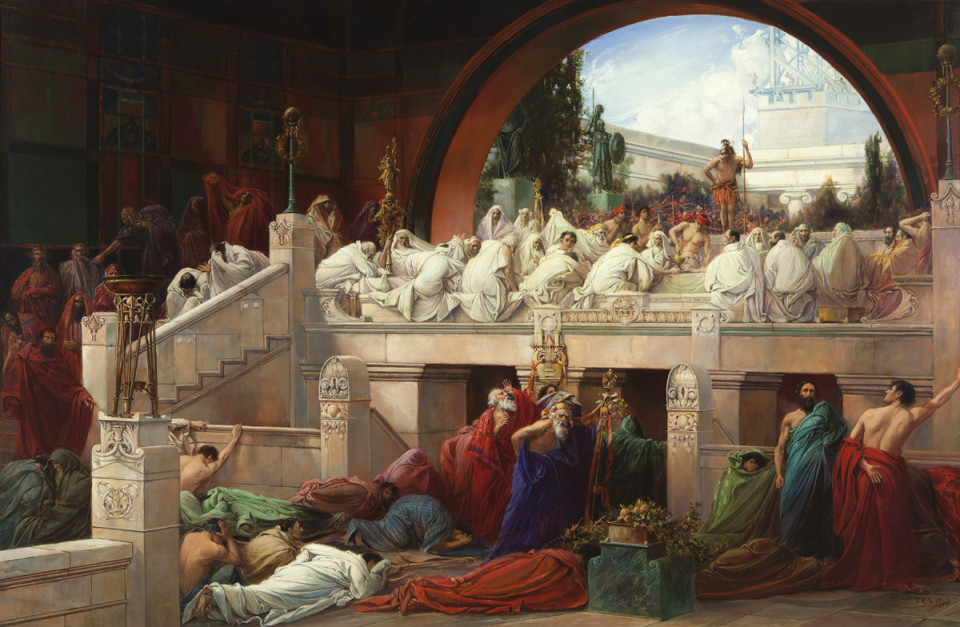 Painting inspired by the final scene in Fate of Capua, a play written in 1700 by Thomas Southerne.

Thomas Ralph Spence was born into a Yorkshire family of cabinetmakers and builders. Following in the family tradition, Spence began his training as an architect, but later excelled in painting, stained glass, and metalwork.

Spence moved to London in 1885, where he became a successful painter of architectural scenes. In the 1890s, Spence exhibited 11 works at the Royal Academy, including A Breezy Morning, The Sleeping Beauty, and The Surrender of Capua, 210 BC. He also exhibited at the Grosvenor Gallery and the New Gallery, and was responsible for the decorative painting in Manchester Cathedral. His more ambitious classical subjects consisted of Greek and Roman subjects, most likely inspired by Alma-Tadema. In 1910, he was the subject of a solo exhibition at the Fine Art Society.

The Surrender of Capua, 210 BC – Passing Round the Poisoned Cup is based on the play Fate of Capua, a tragedy written in 1700, by Thomas Southerne. Fate of Capua takes place during the Second Punic War (218 to 201 BC), a war between Hannibal, leader of the Carthaginians, and the Romans. The citizens of Capua, a city in southern Italy, abandoned their alliance to the Roman Republic and allowed Hannibal to make Capua his winter quarters. The Romans, attempting to regain control of southern Italy, staged a siege on the city of Capua. In response to the Roman assault, Hannibal marched his soldiers to Rome, hoping the Romans would decide to abandon the siege on Capua and rush to defend their home city. However, only part of the besieging force left for Rome, and under continued siege, Capua fell. The Romans declared the territory Roman domain, and the citizens of Capua were either killed or brutally punished.

The Surrender of Capua, 210 BC, a monumental image displayed at the Royal Academy in 1903, depicts the climactic scene in Southerne’s play. The Senate of Capua is finishing up their final feast and are in the process of passing around a cup of poisoned wine; collectively they have decide to end their own lives, choosing dignity and death rather than suffer dishonor and torture at the hands of the Romans.