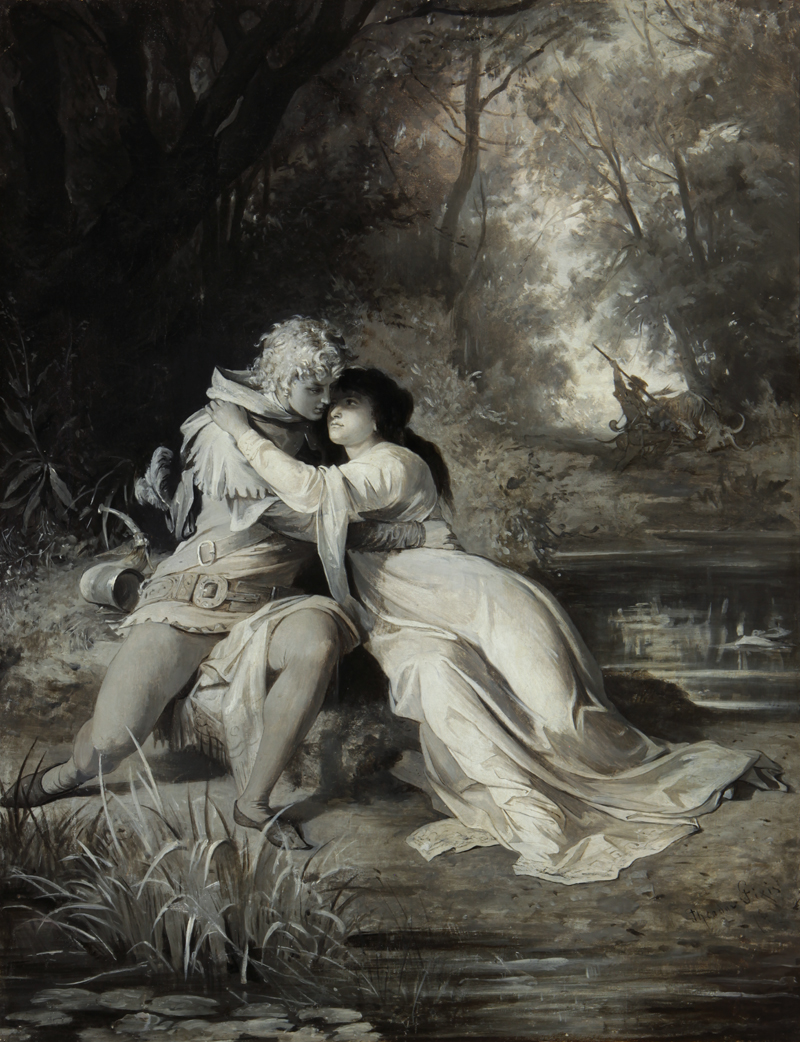 Pixis used the grisaille technique to illustrate a scene from the romantic narrative poem, “Otto der Schütz” (1849), written by the German poet Johann Gottfried Kinkel. Grisaille (from the French word gris – “gray”) utilizes thin, semi-transparent washes of monochromatic oil paint and turpentine on a toned canvas. A grisaille can be used as a stepping-stone toward a finished oil painting or it may be executed for its own sake. The grisaille technique has been around for centuries and was an essential exercise for the Old Masters.

Pixis made his debut as an artist in 1854 when he exhibited his painting Coriolanus. In 1856, funded and supported by his teachers, Pixis left Germany to study in Italy. In 1858, Pixis returned to his native country and settled in the city of Munich. One of his first major works after his return to Germany was a series of illustrations of Gudrun, an ancient Nordic legend.

Pixis was instrumental in the decoration of the Bavarian National Museum and, at the request of Maximilian II, Pixis created three paintings from the histories of Charles X and Charles XI. In 1862 Pixis turned out numerous images in rapid succession, such as Calvin Meets Servetus in Prison and a series of illustrations for German folk songs — all highly praised by critics. Proving himself a master student of Wilhelm von Kaulbach, Pixis skillfully illustrated John Milton’s Paradise Lost and, commissioned by the King of Bavaria, created a set of drawings illustrating Richard Wagner’s musical dramas. In addition to his masterful drawings and illustrations, Pixis also produced large elegant and sentimental oil paintings.

Pixis is most known for his patented invention known as “Pixis painting” – a method of reproducing photochromic pictures or prints with the aid of photographs and oil paintings. This multi-stepped process was first patented in France in 1880.  Unfortunately, a few years after he obtained his patent his complicated method was replaced by simpler process.

What follows is his patent application filed in Bavaria, Germany in 1881. (The translated text may contain errors)

To all whom it may concern:

Be it known that I, Theodor Pixis, a subject of the King of Bavaria, residing at Munich, in the Kingdom of Bavaria and Empire of Germany, have invented certain new and useful Improvements in the Method of Producing Photochromic Pictures or Prints, (for which I have obtained a patent in France, No. 138,427, hearing date August 27,1880) of which the following is a specification.

The object of the present invention is to obtain photochromic pictures, which are faithful reproductions of original pictures or paintings and possess all the characteristics of the latter both as to appearance and blending of the various tints or colors.

Prior to my invention it has been proposed to obtain pictures printed in two or more colors by producing as many photographic negatives from the same subject as there are colors in the picture to be printed, these negatives being stopped out or otherwise treated for preparing a corresponding number of gelatinous printing-forms, so as to adapt the same for receiving the various inks or colors required for the reproduction of the picture.

In this process the printing-forms, each inked with a different color, are successively applied to the paper or surface on which the picture is to appear, so as to cause each form to apply its color on different parts of the surface until the entire picture is completed.

It will be manifest that the use of a series of printing-forms requires great care and skill in order to insure a perfect registration thereof, and even when this is the case the various colors or impressions, when assembled together, frequently show defective junctures or an in]- perfect blending thereof. These results are due to the fact that the colors are not superimposed or laid one upon the other, as in the well-known process of chromolithographic printing; but the different colors are designed to give the solid effects, the shadows, and the half-shades by a careful arrangement thereof or a perfect registration of the different impressions. Such results cannot always be achieved, and even then the finished picture does not present the appearance of a complete facsimile of the original as to the details of execution and finish.

In the process stated all the steps are of a mechanical nature, and it does not differ from chromolithography except as to the nature and manner of preparing the printing-forms.

Colored photographic pictures in which the colors are applied by hand or mechanical means to sheets of paper, which are subsequently albumen lied and sensitized in a silver-bath, have also been proposed; but in this instance the colored photographic proof is exposed under a prepared negative until the solid effects are produced and the half-shades perfectly formed. In other words, the colors are covered by and appear through a superposed sensitive film, on which the solid effects and shades of the picture are produced. A picture prepared in this manner may be a faithful representation of an original, but it lacks permanency, because it involves the use of the fugitive chemicals used in the art of photographic printing, and an exposure of the colors to the bath of chemicals is very liable to impair the nature thereof, and many colors cannot be used at all in carrying out the process.

The present invention consists in the production of a photochromic picture, which is true be made to present the appearance of an oil painting, when oil colors are used for preparing the groundwork of the picture.

In carrying my invention into practice I paint the groundwork of a picture or design on any suitable material – such as canvas, wood, leather, stone, or paper – using for the preparation of such groundwork oil, water, pastel, or crayon colors. The colors used are applied by means of a brush, and a stencil or pattern plate maybe used when multiple prints are to be produced.

In order to show the outlines for guidance in applying the colors, a simple tracing or a feeble outline-print may be put on the material. This outline-print or tracing must be of the same size or contour as the design or image borne by a photographically-prepared printing-plate, which is used at a subsequent stage of the process. The application of the colors requires little skill, because no attention need be paid to the half-shades and shadows, and hence it is even possible to apply the colors by an impression made mechanically by the ordinary means of chromolithography.

After the groundwork or body-colors have been applied in the manner stated the colored plate or surface is ready for the second step of the process. This consists in bringing out the interior forms and the fine mezzotints of the picture by printing upon the colored surface by means of a phototype-plate or printing form, which is prepared by exposing a sensitized gelatinous printing form or film under a negative taken from the original to be produced. I prepare the printing-form in the well-known manner; but instead of using the ordinary inks and making an impression on a white or uncolored surface, I employ an ink containing a good siccative – such as Japan gold-size — and print directly upon the prepared surface, so as to attain the results above stated.

It will be manifest that the design or image on the printing form must register with the colored or painted groundwork, and this, as already stated, I accomplish by making the groundwork and design on the printing-plate of the same size or contour and using the necessary care in making the impression.

The inks used for inking the forms may be of any suitable tint, and in many instances I make use of two tints for one picture. For example, the deep shadows are in a strong brown color and the mezzotint is in a grayish or bluish color.

The presence of a siccative [an oil drying agent] in the printing ink is highly essential in carrying out my process, because said ink must be made to dry quickly and thoroughly.

No other steps except those above mentioned need be necessary to produce a finished picture in which the colors are properly brought out and blended, as in the original, of which it is a perfect copy; but the effect can be further increased by retouching or toning the picture by hand and glazing the painted and printed surface, as is commonly practiced in finishing oil-paintings.

Having thus described my invention, what I claim as new, and desire to secure by Letters Patent, is