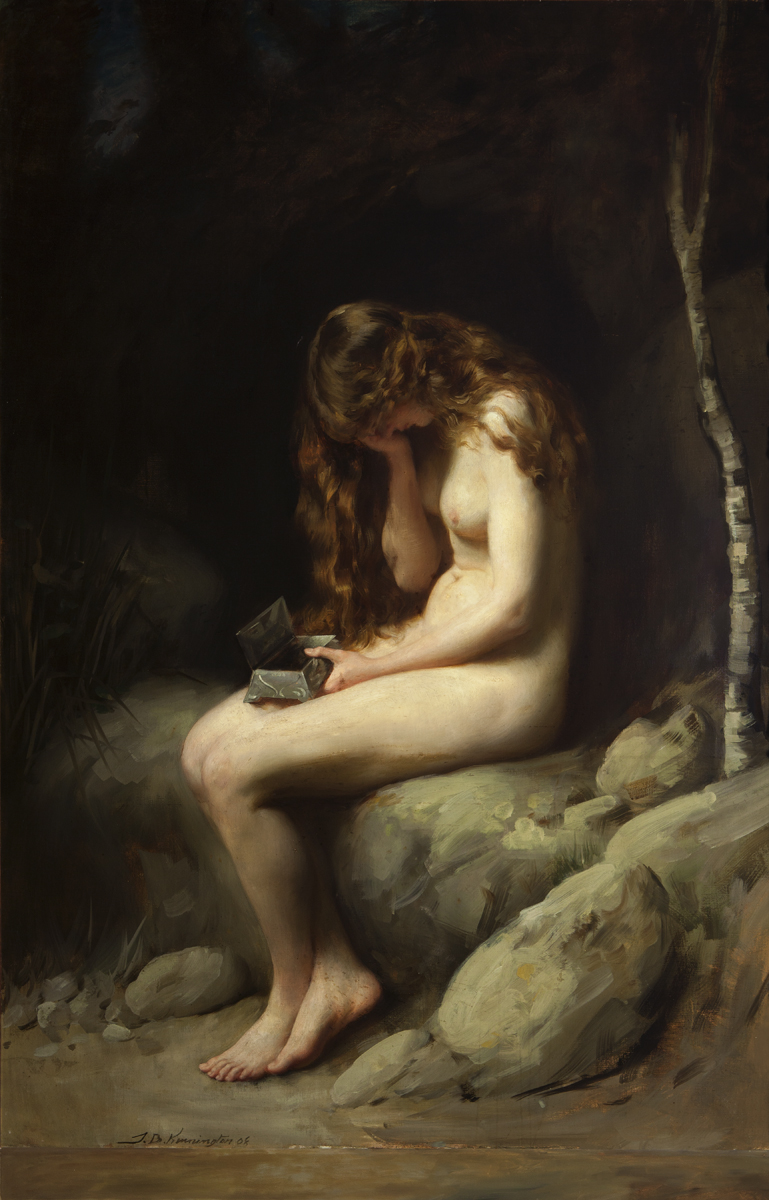 Kennington attended several prestigious schools, including the Academy Julian, where he trained alongside Bouguereau. Exhibiting frequently at the Royal Academy, he became a respected portrait artist, painting Queen Victoria in 1898. Passionate about social reform, he established an independent institution that provided exhibition opportunities for artists rejected and discouraged by the dictatorial Academy. Pandora is a compelling portrait of human suffering, an allegory for the looming catastrophe ‐ humanity at the brink of a modern age. It is interesting to note that at the height of Academic painting, nudes were only permissible in the form of mythological beings, with genitalia hidden from view.

Born in Grimsby England on April 7,1856, Thomas Benjamin Kennington trained at an impressive line of schools including the Liverpool School of Art, the South Kensington School of Art, and finally at the Academy Julian with William Bouguereau, Jules Lefebvre, and Tony Robert-Fleury. Throughout his life he exhibited regularly at the Royal Academy and his work was also seen at the Royal Society of British Arts and the famous Grosvenor Gallery. His work was well appreciated and he even won a bronze medal at the Exposition Universelle of 1889.

Kennington was a social activist who cared deeply about the poor and believed strongly in the artists’ community. He was a founder and first secretary of the New English Art Club whose purpose was to provide exhibition opportunities for artists who were not accepted to show at the Royal Academy or who were dissatisfied with its supremacy. Kennington was also a founder of the Imperial Arts League, which still exists today as The Artists’ League of Great Britain. The Artists’ League was founded in 1909 with the purpose of protecting and promoting the interests of artists in matters of business such as copyrights, contracts, and insurance. Kennington often painted, like many of his contemporaries, the plight of the impoverished and destitute in order to draw attention to the need for social reform. As well, he was a painter of beauty and scenes from everyday life. He also became a well-established portrait artist, painting Queen Victoria (1819-1901) in 1898.