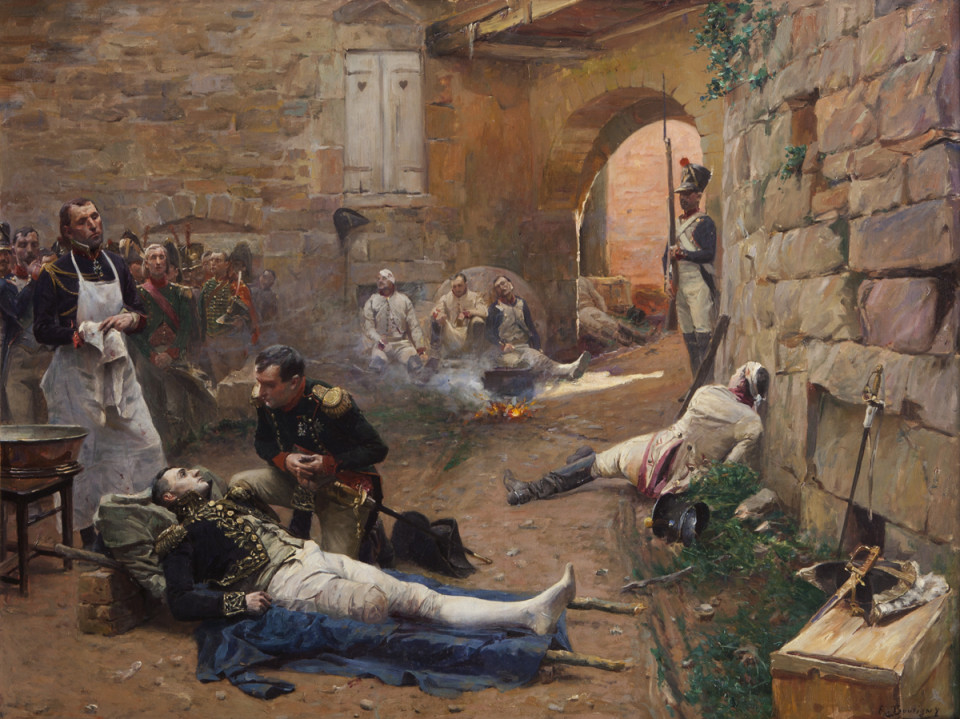 Boutigny was trained at the Ecole des Beaux-Arts and was decorated with the Legion of Honor in 1898. His painting, Napoleon Rendant Visite Aux Blessés (Napoleon Returns to Visit the Wounded), is a perfectly orchestrated propaganda piece with the emperor portrayed as a calm, compassionate, and commanding hero bestowing comfort to his friend, Marshal Jean Lannes, who was seriously wounded in the 1809 Battle of Aspern-Essling. Napoleon, oddly unsoiled with blood, is bathed in light, not unlike a saint or savior with the miraculous power to heal.

Marshal Jean Lannes, lying on the ground with one leg amputated, was injured on May 22, 1809 while he was engaged in the brutal battle of Aspern-Essling. The French were battling the Austrian army in an attempt to cross the Danube.

Lannes was in the company of his mentor, General Pierre-Charles Pouzet. As the two men discussed the battle, a cannonball struck Pouzet in the stomach and killed him instantly. Reeling from the shock at watching his close friend die so violently, the dazed Lannes stumbled to the edge of a ditch and sat down. As he gathered his thoughts, shrapnel from a second cannonball tore through his legs, smashing the knee of one and badly injuring the other. Although Lannes told witnesses that his injuries were not as bad as they seemed, he was unable to stand. He was rushed to the well-known military medic, Dominique Jean Larrey (pictured in the painting), surgeon-in-chief of the Napoleonic armies for 18 years. Larrey initially amputated one leg, but ultimately was forced to amputate Lannes’ second leg too.

When news of Lannes’ injuries reached Napoleon, he rushed to his friend’s side. Under Napoleon’s instruction Lannes was moved to the comfort of a house in Kaiser-Ebersdorf, but there was nothing that could be done to save the injured man. Instead Lannes lingered on for a week, and died on May 31, 1809. Napoleon ensured that his confidante and dear friend was buried at the Pantheon, where he rests to this day.