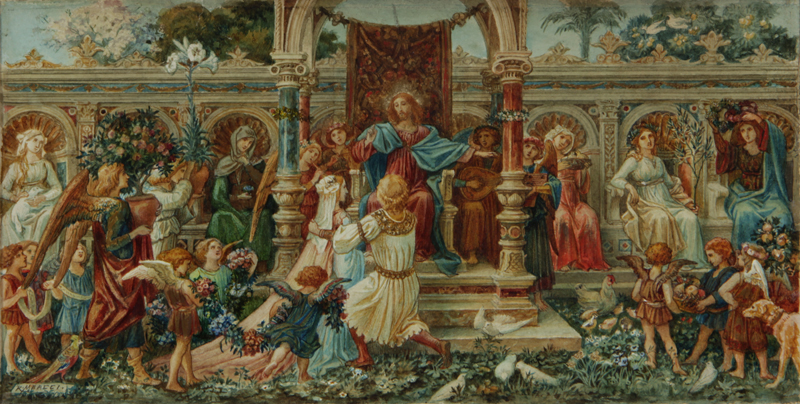 Born in Dolciano, a province of Siena, Riccardo Meacci studied at the Instituto di Belle Arti di Siena under Luigi Mussini. He worked in Biringucci until 1881, when he moved to Florence. He painted with meticulous attention to detail, in the manner of his Italian master forefathers. Known for his rich, jewel-toned colors, Meacci typically painted religious and allegorical themes. He was renowned throughout Europe and was especially sought after by the English aristocracy, many of whom were his patrons.

He received commissions from Queen Victoria, the Earl of Lothian, the Duke of Connaught, Prince Franz of Lichtenstein and Leopold of Hohenzollern. Additionally, there paintings were commissioned by the Palazzo Pitti in Florence: The Arrival of the Convicts, The Offering of the Country, and The Three Wise Men. Many of Meacci’s works can still be seen today in Siena. One of them, St Peter Receiving the Keys, is a triptych in the Basilica of Saint Francis. He also executed a fresco depicting various Italian provinces, which is still visible in the Monumental Room of the town hall in Siena.