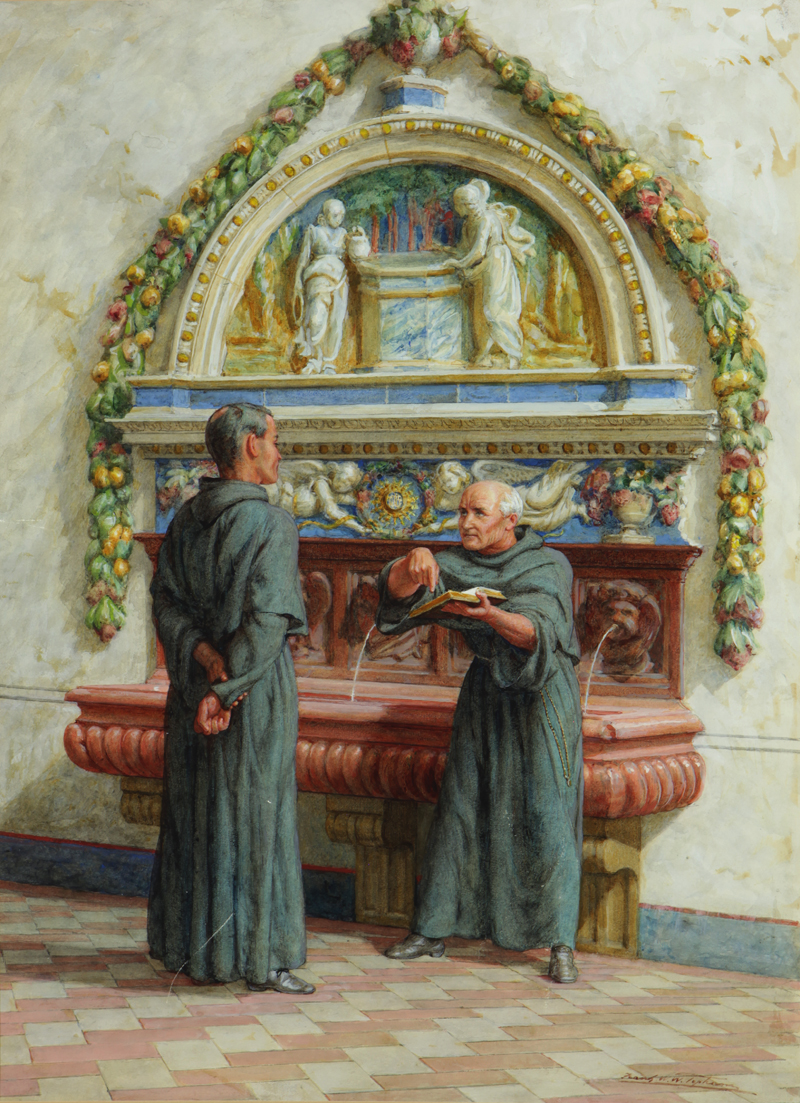 Around 1830 Topham went to London, and at first found employment in engraving coats-of-arms. He then engraved landscapes after William Henry Bartlett and Thomas Allom.

His career as watercolorist appears to have started self-taught, helped by practice at the meetings of the Artists’ Society in Clipstone Street. He was in 1850 one of Charles Dickens‘s company of actors (the “splendid strollers”) in The Rent Day of Douglas Jerrold and Bulwer Lytton‘s Not so bad as we seem.

Topham’s earliest exhibited work was The Rustic’s Meal, which appeared at the Royal Academy in 1832, and was followed in 1838, 1840, and 1841 by three paintings in oil-colors. In 1842 he was elected an associate of the New Society of Painters in Watercolors, of which he became a full member in 1843. He retired, however, in 1847, and in 1848 was elected a member of the (Old) Society of Painters in Watercolors

His earlier works consisted chiefly of representations of Irish peasant life and studies of Wales and her people. These were diversified in 1850 by a scene from Dickens’ Barnaby Rudge.

Topham made designs for Fisher, Son & Co.’s edition of the Waverley Novels, some of which he engraved. He drew on the wood illustrations for Pictures and Poems, 1846, Mrs. S. C. Hall‘s Midsummer Eve, 1848, Burns’ Poems, Thomas Moore‘s ‘’Melodies and Poems, Dickens’s ‘’A Child’s History of England, and other works.

The earliest of Topham’s Spanish subjects appeared in 1854, when he exhibited Fortune Telling, Andalusia, and Spanish Gypsies. These paintings were followed by The Andalusian Letter-Writer and The Posada in 1855, Spanish Card-players and Village Musicians in Brittany in 1857, Spanish Gossip in 1859, and others, mainly Spanish.

In 1861 exhibited The Angel’s Whisper and Irish Peasants at the Holy Well. In 1864 he began to exhibit Italian drawings, sending Italian Peasants and The Fountain at Capri, and in 1870 A Venetian Well.

Four of Topham’s drawings, Galway Peasants, Irish Peasant Girl at the foot of a Cross, Peasants at a Fountain, Basses-Pyrénées, and South Weald Church, Essex, went to the South Kensington Museum. Several of his drawings were engraved: