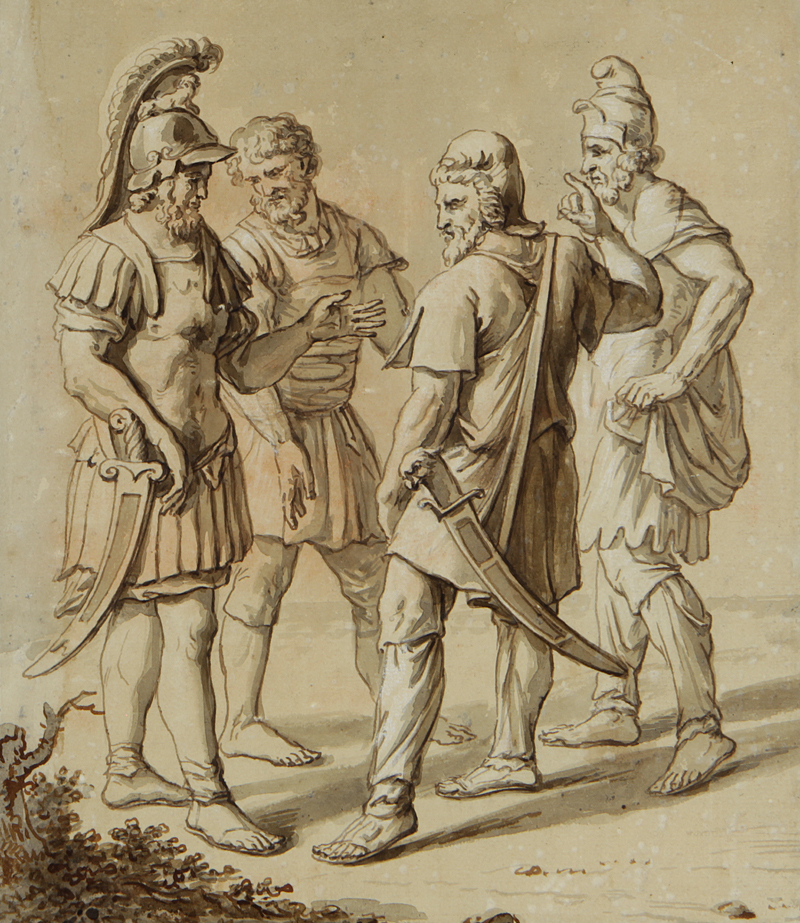 Jean-Antoine Julien, known as Julien de Parme, is considered one of the precursors of Neoclassical painting. The son of a stone-mason, de Parme received his initial training in Craveggia (an Italian region near the border of Switzerland) under a local artist, Giuseppe Borgnis, with whom he spent two years. After a short sojourn in Paris, de Parme settled in Rome, where he threw himself into a study of antiquity. He praised the great masters of the Renaissance and was strongly influenced by Raphael, Caravaggio, Carracci, and Domenichino – Carracci’s favorite pupil.

In Italy his main patron was Guillaume-Léon du Tillot, Marquis of Felino and Prime Minister to the Duke of Parma, who each year commissioned a large historical picture. In gratitude to the court of Parma, the artist decided to use the name Julien de Parme. When Guillaume-Léon du Tillot fell from power in 1772, de Parme decided to follow him into his Parisian exile. After du Tillot’s death in 1775, de Parme found another patron, the poet and politician Louis-Jules Barbon Mancini-Mazarini, duc de Nivernais (1716-98), for whom he worked for the next twenty years. Unfortunately, Julien de Parme’s style did not meet with great success in France and his career ended in obscurity and poverty. De Parme’s paintings and name resurfaced at the end of the 20th century, when in 1998 Pierre Rosenberg, the curator of the Louvre, devoted an entire exhibition to him.

De Parme’s Journal and his published correspondence with the Belgian painter André-Corneille Lens (1739-1822), president of the Society of painting, sculpture and architecture in Brussels, serve as invaluable documents for the artistic life in Rome and Paris at the end of the eighteenth century. De Parme’s earliest known extant picture is a life-size painting of Cupid (1762), currently in the Barbieri private collection in Parma.