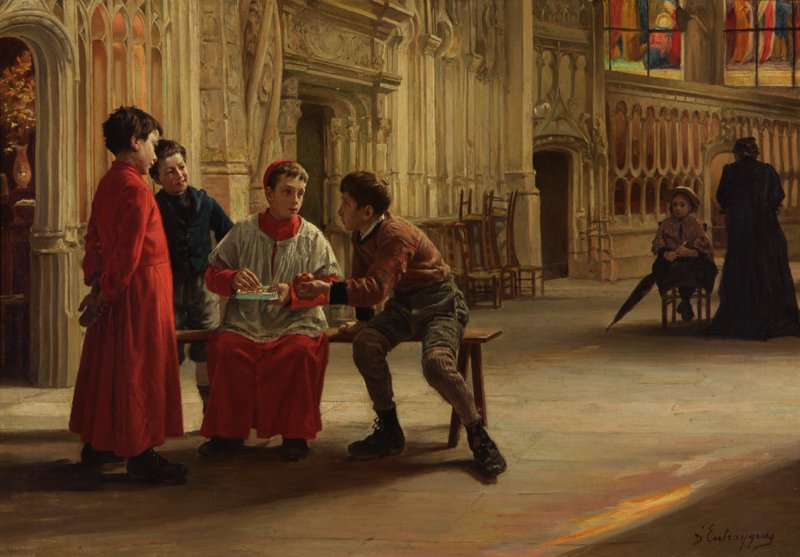 Born on 14 July 1850 in the agricultural town of Brives in central France, Charles Bertrand d’Entraygues’ artistic career was based on the depiction of scenes that he must have witnessed during his formative years.  The interiors of modest homes filled with children playing or families gathered around the dinner table are typical of d’Entraygues’ mature imagery as are paintings of choirboys engaged in playful, if slightly mischievous, activities.

This type of anecdotal genre painting became increasingly popular in the last half of the nineteenth century. As d’Entraygues’ career illustrates, these amusing subjects were extremely successful at the Salon, but they were also much admired by the expanding bourgeois art collector.  Children Playing from 1884 illustrates just how well d’Entraygues organized his studio for the production of this type of image. The setting for this painting is a variation on the setting of La table des enfants, clearly a ‘set piece’ that the artist could alter as needed to suit the composition.  Even the children seem to be based on the same models, probably members of d’Entraygues own family.  In general, these paintings are small in size and would have been quite affordable for the bourgeois buyer.  In fact, the commercial art market in fin-de-siècle Paris was expanding quickly.  As more and more artists challenged the judgment of Salon juries, and as the economy rebounded from the wreckage of the Franco-Prussian War, private art galleries found a ready audience for reasonably priced naturalist paintings.  Although only a select group of clients were interested in the modernist experiments of post-Impressionism, there were many well educated and financially comfortable patrons who sought out artwork that conveyed the kind of bemused or entertaining message that d’Entraygues created.

In 1876, he exhibited the painting l’embarras du choir  (“Too great a choice”) at the Artists’ Exhibition. He was awarded with a distinction in 1899 and made a member of the Society of French Artists in 1904. From 1901 to 1904, at the Exhibition of French Artists, he presented several humorous images featuring children during their playtime, each one receiving tremendous praise.

After exhibiting maîtrise d’Écouan, a painting similar to the one above, an art critic wrote: “a similar subject which has already been painted many times by a great number of painters as they are seduced by the diversity of all these fresh faced children, by the rebellion of their expressions and their mischievous looks. It is therefore refreshing to see that Monsieur d’Entraygues has had a go at varying a theme which is no longer new, by giving it an unexpected flavor, thanks to his skill and his talent.”

He studied at the École des Beaux-Arts in Toulouse, then moved to Paris to study with Isidore Pils (French Academic Painter, 1813-1875). He left Paris in 1906 and lived in Vernon until his death in 1914.