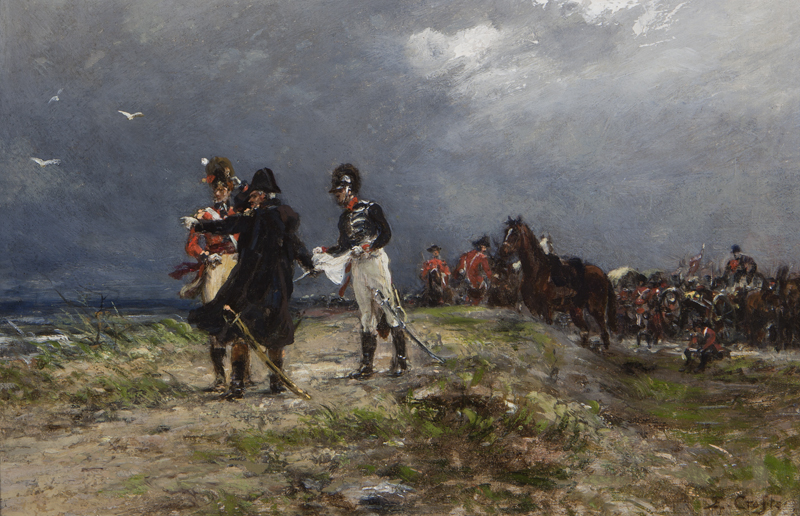 ERNEST CROFTS B. Leeds 1847; D. London 1911.    Crofts was one of the leading military-historical painters of the late Victorian and Edwardian periods, exhibiting well over 40 paintings at the Royal Academy and numerous scenes at other exhibitions depicting soldiers in battle or on campaign. And, unlike many of his contemporaries, he had had the luxury of actually witnessing soldiers in battle during the Franco-Prussian War.

After his early schooling at Rugby, the young Yorkshireman moved to Dusseldorf in 1870 to study art with the German military artist, Emile Hunten (1827-1902), and spent almost ten years there before returning to England to study with the historical genre painter, Alfred Barron Clay. During his stay in Germany, he accompanied Hunten to various battlefields during the war with France and was present at the battle of Gravelotte, but not being a war correspondent, had to remain on the other side of the Moselle River. He did witness the battles around Saarbruck and Borny, and these experiences helped to mould the young man’s ideas with the result that his early paintings represented scenes from the war. One such painting entitled One touch of nature makes the whole world kin represented a Prussian soldier offering water to a wounded Frenchman, and won for the artist a silver medal at the Crystal Palace in 1874. At the Royal Academy in the same year he showed a scene depicting the French retreat from Gravelotte. However, in the following year, he turned his attention to a more historical military scene with his representation of the battle of Ligny in 1815, showing Napoleon surrounded by his staff surveying the battlefield while columns of infantry advance to the front. This was to be the first of no fewer than twelve paintings shown at the Royal Academy by the artist between 1875 and 1906 representing the events surrounding the Waterloo campaign, the one exception being his 1887 rendition, Napoleon leaving Moscow.

For whatever reason, Crofts produced a series of accurate retrospective scenes of the Waterloo campaign right down to the minutest detail. Gone were the sweeping panoramic battle scenes of the early 19th century. The focus now was on the incident. Crofts had the skill and eye to produce these masterpieces of late Victorian battle art equaled only by Lady Butler. He himself built up a large collection of original uniforms and accessories, many of which were exhibited at the Royal Military Exhibition held at Chelsea Hospital in 1890. Many of his surviving sketches of figure studies attest to his fine draughtsmanship. It is quite probable that Crofts visited the battlefield of Waterloo and vicinity to gather sketches of the various locales he intended to depict. Other places were visited in order to obtain particular information such as details of Napoleon’s coach at Madame Tussaud’s for his 1879 work, On the Evening of the Battle of Waterloo. In this painting, Napoleon, bareheaded and forlorn, escapes from his carriage just before it becomes the booty of the Prussians. His troops are being routed an are in an utter state of confusion although several ranks of the old guard vainly attempt to present a hasty line of retreat. Two paintings dating from 1876 and 1878 represent the events before the battle. In the scene entitled On the morning of the battle of Waterloo, Crofts depicted the centre of the French position at break of day on June 18, 1815, under a dull sky laden with rain. Napoleon, surrounded by several marshals makes preparations for the final inevitable struggle. The Emperor, pale but undaunted, sits at a table near a farmhouse consulting a map while questioning a local farmer named Decoster. All around, the French army nervously awaits its fate. The painting of 1878 was entitled Wellington’s March from Quatre Bras to Waterloo and featured a group of French prisoners being escorted by soldiers of the 79h Highlanders at the moment when the Duke of Wellington salutes a troop of passing Royal Scots Greys, Wellington appears in other paintings by Crofts including At the Farm of Mont St. Jean painted in 1882. Other paintings of the battle represented the fighting around Hougoumont, the capture of a French Battery by the 52nd Regiment (1896), and Napoleon’s Last Grand Attack (1895).

While Crofts represented scenes from the wars of Wallenstein, Marlborough, and even a painting of the Sikh War, Charge of the 3rd King’s Own Light Dragoons, Moodkee, it was the events of the English Civil War which, like Waterloo, captured the artist’s imagination. In fact it was his Royal Academy picture of 1877 – Oliver Cromwell at Marston Moor – that brought the artist to the attention of many art critics. Similarly it was another Civil War scene, his 1898 painting To the rescue: an episode of the Civil War, which he painted on election to the Academy itself, the only late nineteenth century military artist to achieve this honour. Most of the major battles of the war such as Edgehill, Marston Moor and Naseby were painted by the artist as well as siege related scenes, i.e. Oliver Cromwell at the Storming of Basing House, painted in 1900, The Surrender of Donnington Castle, painted three years later, and The surrender of the city of York to the Roundheads, exhibited only three years before the artist’s death. Crofts painted a trilogy of canvases surrounding the execution of Charles 1 as well as scenes representing the campaigning at Worcester such as Charles 11 at Whiteladies (1898) and The Boscobel Oak (1889).

Crofts died on March 19, 1911 at Burlington House where he had lived as Keeper of the Royal Academy. Three years later and almost a century after Waterloo, Europe went to war again on a scale unimagined by the artist. The Great War inspired a vastly different type of art focusing on the horrors rather than the glory of war. While Crofts’ pictures had been popular in the 1870’s and 1880’s, the public lost its appetite for war pictures in the early years of the 20th century and during the hideous war in South Africa. While Crofts continued to paint scenes of war within the confines of the Royal Academy exhibitions, the public lost interest in his work and today, with the exception of a handful of canvases in public galleries, his paintings are more or less forgotten but they deserve greater attention if only for their wealth of detail and as windows on late Victorian attitudes to war and history.