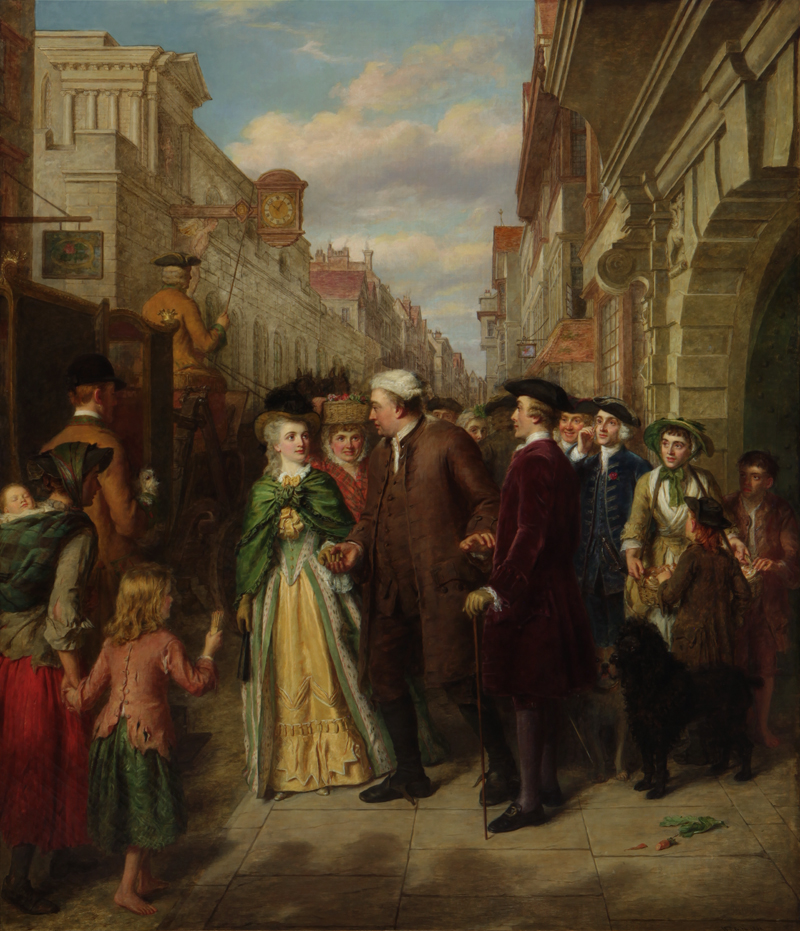 William Frith’s anecdotal illustration was inspired by a scene described in the famous biography of Samuel Johnson written by James Boswell. Samuel Johnson, often referred to as Dr Johnson, was one of the most famous literary figures of the eighteenth century. His best-known work is his ‘Dictionary of the English Language’. The painting, Dr. Johnson’s Tardy Gallantry, is dated 1886 and hung in the Royal Academy of Arts the same year.

The author describes Mr. Johnson bidding farewell to an important visitor. Mr. Johnson realizes that he has not sent his guest off in a fashion befitting “a foreign lady of quality.” Eager to show himself “a man of gallantry,” he hurries outside, takes her hand, and guides her to her coach. “His dress was a rusty brown morning suit, a pair of old shoes by way of slippers, a little shriveled wig sticking on the top of his head, and the sleeves of his shirt and the knees of his breeches hanging loose. A considerable crowd of people gathered round, and were not a little struck by this singular appearance.”

“When Madame de Boufflers (the mistress of the Prince of Conti) was first in England,” said Beauclerk, “she was desirous to see Johnson. I accordingly went with her to his chambers in the Temple, where she was entertained with his conversation for some time. When our visit was over, she and I left him, and were got into Inner Temple Lane, when all at once I heard a voice like thunder. This was occasioned by Johnson, who, it seems, upon a little reflection, had taken it into his head that he ought to have done the honors of his literary residence to a foreign lady of quality, and, eager to show himself a man of gallantry, was hurrying down the staircase in violent agitation. He overtook us before we reached the Temple Gate, and, brushing in between me and Madame de Boufflers, seized her hand and conducted her to her coach. His dress was a rusty brown morning suit, a pair of old shoes by way of slippers, a little shrivelled wig sticking on the top of his head, and the sleeves of his shirt and the knees of his breeches hanging loose. A considerable crowd of people gathered round and were not a little struck by this singular appearance.”

William Powell Frith was arguably the most prolific and financially successful British artist ever to have lived. Born in the same year as Queen Victoria, Frith originally wanted to be an auctioneer but was forced by his parents – who were convinced of his genius – to take up art as a career. His work spanned the entire Victorian age and he became famous for large-scale panoramic paintings, overflowing with colorful characters and vivid vignettes. Fascinated by the newly industrialized British society, Frith used his canvas as an opportunity to explore the best and worst of Victorian life.

Barely out of his teens, Frith celebrated his first Royal Academy success – a painting depicting a scene from novel The Vicar of Wakefield. But his success didn’t stop there – the ultimate coup came when he received a request from Charles Dickens for several illustrations. Even in his apprentice days Frith recognized the significance of a commission from the famed author Charles Dickens. Little did Frith know that this business arrangement would eventually lead to a lifelong friendship.

Frith was elected Associate of the Royal Academy of Arts in 1845 and became a full member in 1852. For over sixty years, from 1840-1902, Frith exhibited paintings at the Royal Academy. Similar to a Dickens’ novel, his images portrayed contemporary social life with “characters” from all segments of society. His first panorama of Victorian life, Ramsgate Sands, exhibited at the Royal Academy in 1854 and was purchased by Queen Victoria – the first of many paintings acquired by the Royal Family. Encouraged by the Queen’s endorsement, Frith went on to paint a succession of similar large-scale panoramas. He is best known for Derby Day (1858) and The Railway Station (1862), both critical commentaries on the collision of wealth and poverty. When Derby Day was displayed at the Royal Academy’s annual exhibition it was so popular with the viewing public that it needed to be shielded by a special rail to protect it from the admiring crowds.