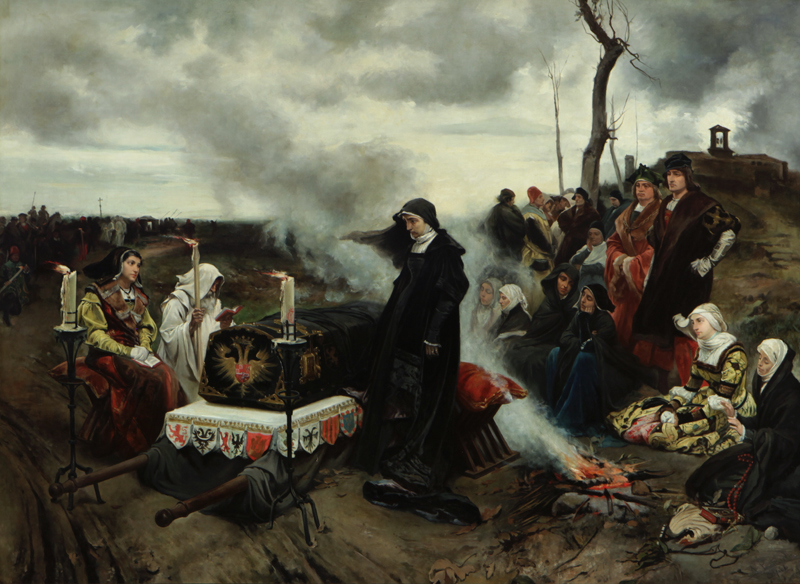 Fransisco Pradilla y Ortiz is perhaps the most celebrated Spanish artist of his time, and Doña Juana La Loca – Death of Felipe The Handsome is a magnificent example of Pradilla’s anecdotal historical paintings.

By the end of his life, Francisco Pradilla y Ortiz had served as the Director of the Prado Museum, won numerous international awards, including the French Legion of Honor, and held the position of the Director of the Spanish Academy in Rome. He is best remembered for having taught the painter Joaquín Sorolla y Bastida in Rome, and for the painting Doña Juana La Loca, which toured several European nations as a masterpiece and galvanized a new generation of history painters in Spain.

Pradilla was heavily influenced by Velázquez, Titian, El Greco and Ribera, all of whom are well represented in the Prado Collection. Even late in life, he regularly copied Old Master paintings in order to improve his technique. He was known for his dedication to the study of Greek and Roman texts and Spanish historical documents, which inspired many of his paintings. He was also well noted by friends for a large library of rare books and an ability to speak several languages.

Francisco Pradilla y Ortiz was born to a poor family in Zaragoza, Spain. He was accepted to the local Institute of Zaragoza. But, due to a lack of money, he was unable to pay for his own supplies and tuition and had to end his studies there.

Thereafter, Pradilla joined the workshop of the stage scenery painter Mariano Pescador. The work gave him needed money, which he used to attend the Fine Arts School in the Academy of San Luis in Zaragoza and, eventually, move to Madrid.

In Madrid, he continued to make a living painting scenery for theaters. His ambition and talent eventually won him a place in the School of Painting and Sculpture at the Academy of Fine Arts of San Fernando in Madrid. In addition to his classwork, the records of the Prado show that, beginning in 1869, he regularly visited the Collection in order to copy Old Master paintings.

Pradilla was among the first group of students given government scholarships to study at the new Spanish Academy in Rome, founded in 1873, but opened to students in 1874. The Spanish School in Rome would become the most important center for artistic training in Spain and Pradilla would become one of its most influential students (1874-1877) and teachers (1877-1896).

During three years, students were required to produce copies of Old Master paintings and Greek and Roman statuary, in addition to regular travel in order to encourage a broader perspective. While a student, Pradilla traveled extensively, visiting Venice, Florence, Milan, Piza, Paris, and six cities in Germany. The culmination of each student’s study in at the Spanish Academy in Rome was a large, multi-figural history painting. In Pradilla’s case his final painting for the Academy, Doña Juana la Loca, would be an internationally-praised work and awarded a Medal of Honor at the 1878 National Exposition of Bellas Artes.

The painting depicts a scene from the life of the Spanish Royal Joanna (1479-1555), the second daughter of King Ferdinand II and Queen Isabella of Spain. After the death of her husband, Joanna accompanied the body to its place of burial. Refusing to sleep or leave the casket, she kept vigil over the casket in torrential rain and winds. This, combined with other behaviors deemed as eccentric, estranged her from other royals. She spent the last years of her life isolated in a convent.

Pradilla’s portrayal is notable for its underlying classical composition combined with Realism. In addition to his strong figural work, the painting reflects Pradilla’s understanding of landscape. He was a member of the Spanish Watercolorist Society, which specialized in disseminating landscape skills, and a student of the famous Spanish landscape painter Carlos de Haes. Several sketches for the landscape of Juana la Loca reveal the enormous amount of work he did to effectively portray the atmosphere, clouds, and ground convincingly.

Pradilla served as the Director of the Spanish Academy in Rome for only eight months, from September, 1881 to April, 1882. He also served as the Director of the Prado for a short thirteen months, from January, 1896 to February, 1897, after an important work by Murillo, St. Anne Teaching the Virgin Mary, was stolen. (It was recovered in 1911).During the last years of his life, both the national government and the government of his birth, Zaragoza, would commission several works. But, he never repeated the success of Doña Juana la Loca, although he continued to paint in the same style.

Retrospectives of his life and works were held in Madrid (1948 and 1985) and Zaragoza (1985). Three of his major works are now held in the Prado, but the majority are held in private hands or regional museums and government buildings, especially in his native Zaragoza.

Queen Juana I of Castile (1479-1555) is generally known as “Joan the Mad”. Despite her nickname, Juana’s “madness” has often been disputed; she may have been locked up for political reasons only. Either way, she was a passionate woman, who fell madly in love with her handsome husband and continued to love him even after his death.

Philip the Handsome of Austria was born in the year 1478 in Bruges; what is now a part of Belgium. When Philip was eighteen years old he took on rulership of the inherited Burgundian lands himself, although as a youth he was known to be irresponsible and lazy. In 1496 he married Joanna (Juana), the daughter of Ferdinand of Aragon and Isabella of Castile, in Lier Belgium. Juana, who was often sick as a child, had developed into a sullen, reserved young woman, aloof and emotionally unstable. This was to be a politically arranged marriage that sought to strengthen Spain through Portugal against the French.

At their first encounter they were immediately smitten with each other, demanding that they be married on the spot. For Philip, whose past-times included mostly drinking, philandering, and feasting, but Juana, naive in her expectations of court marriage, was utterly infatuated with her new husband.

In 1501 Philip and Juana were summoned back to Spain. Ferdinand and Isabella no doubt wanted to reconnoiter their position after the recent loss of their only male heir to the Spanish Crown, the son of her sister Isabel, (who also died), and her elder brother.  This left Juana as sole heiress to Spain, Mexico, Peru, and the whole of the Caribbean!

Philip had a lousy time in Spain. The continual religious rituals, the awful heat, and the  fact that Spanish kept all the women hidden away somewhere, sent Philip running and screaming back to Flanders. Juana’s sanity seemed to worsen under the cold discipline of her mother. Indeed, when she attempted to fly after Philip she was imprisoned by her mother in Castle La Mota. Isabella would not hear of Juana’s rejoining Philip until she had been properly tutored in Queenship. Juana, who tried to escape but was thwarted by her mother, went from periods of brooding silence to frenzied fits of rage.

Juana’s mother died in 1504 and she was proclaimed Queen of Castile.

Then in September of 1506 Philip fell ill for six days and died at Burgos. He was 28 years old. She refused to leave his corpse but for short periods and she wore only black. Philip’s coffin was eventually moved to a monastery, but five weeks later she had him exhumed amid rumors that for some crazy reason his body might have been stolen. She tried to kiss his very dead feet and had to be forcibly removed from the tomb.

When a plague broke out in Burgos she decided to make off for Torquemada, take the coffin with her, and leave it en-route at Granada. There she was compelled again to check to make sure he was still in there.

She had the coffin guarded by armed escorts, and other women were warned to keep away. Traveling only at night, resting at monasteries whilst avoiding nunneries, she moved along stopping finally at a small village where, refusing the help of midwives, she gave birth to a daughter, Catalina. By this time Ferdinand had ordered her back home where she was once again locked up in the castle. But before she left she had the coffin opened just one more time, just to make absolutely sure that Philip, the very likely not-so-handsome-anymore, was still in there. And sure enough…they found he hadn’t gone anywhere!