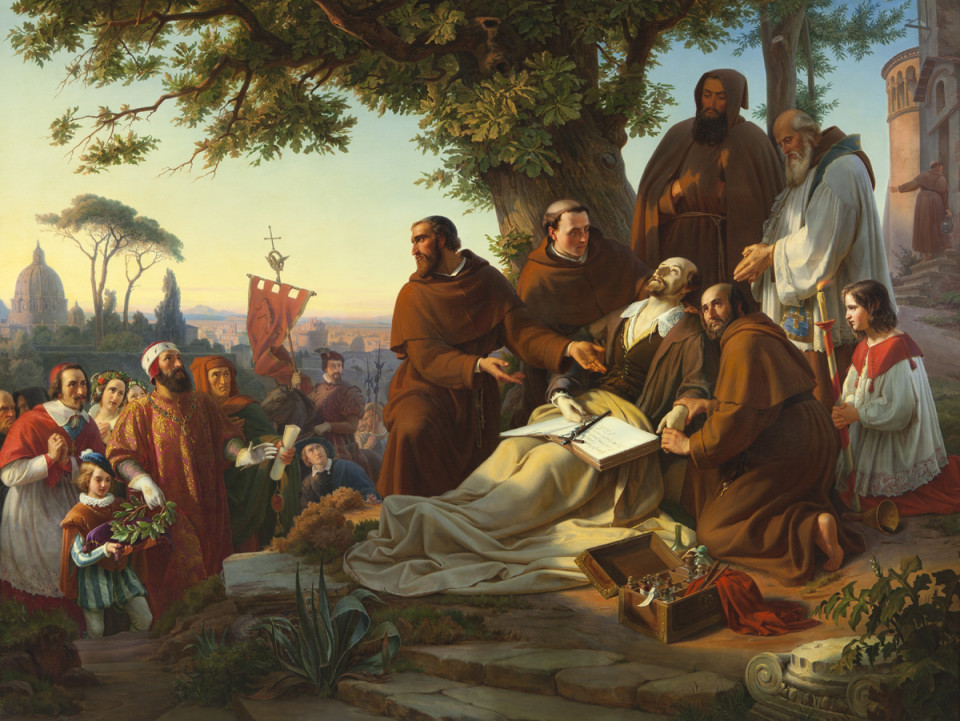 Theobald Reinhold Freiherr von Oer was a German artist associated with the Düsseldorf School of painting. He is best known for his scenes from German literature and images of ancient history. At a very young age von Oer displayed a remarkable talent for drawing. Unfortunately, at the age of 12, he fell ill with scarlet fever and lost his hearing, as well as parts of his speech. Although challenged with significant health issues, at the age of nineteen he began his studies at the Royal Academy of Arts in Dresden (Dresden Academy of Fine Arts). He proved himself exceptionally talented and quickly moved to the Kunstakademie Düsseldorf (the Arts Academy in the city of Düsseldorf), where he studied under Friedrich Wilhelm von Schadow, a German Romantic painter.

In 1836 he travelled through the Netherlands and Belgium, eventually arriving at Paris, where he visited various French artists. He continued his travels through France, and in 1837 he made his way into the Italian cities of Rome, Capri, and Ischia. Although his main emphasis was perfecting his skill as historical painter, he enjoyed painting landscapes and portraits. After returning to Germany, von Oer became a professor at the Dresden Academy of the Fine Arts.

The painting Death of Tasso is signed and dated 1849 and inscribed: Dresden, and is only one of two paintings by Theobald von Oer not in German museums. Torquato Tasso (1544 – 1595) was the leading poet of the 16th Century and was celebrated for his heroic epic poem La Gerusalemme liberate (Jerusalem Delivered, 1581), a highly imaginative version of the First Crusade in which Catholic knights, led by Godfrey of Bouillon, battle Muslims in order to take Jerusalem. The painting portrays Tasso during his last hours of life, after years of battling poverty, isolation, depression and psychosis. The poet tragically died days before he was to be crowned the ‘King of Poets’ by the Pope. Legends describe him wandering the streets of Rome half mad, convinced that he was being persecuted. Tasso was most likely suffering from schizophrenia. At times, for his own safety, Tasso was confined in St. Anne’s “lunatic asylum.”

La Gerusalemme liberate, first published in Parma, Italy in 1581, became one of the most widely read and cherished books of the Renaissance. It was translated into English by Edward Fairfax under the title “Godfrey of Bouillon” (London 1600). The Knohl’s Rare Book Collection is the steward of this unique first-edition English translation, published in London in 1600.