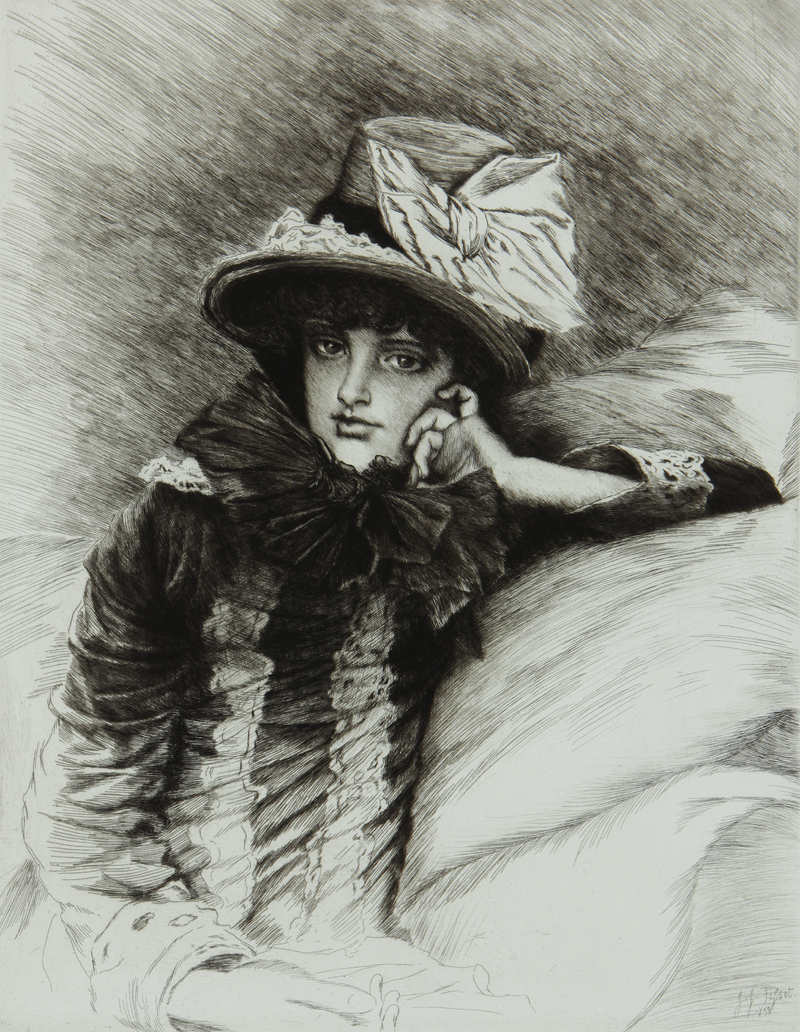 James Jacques Joseph Tissot was a very successful French painter and illustrator who, in 1856, went to Paris to study at the Ecole des Beaux Arts. Tissot made his Salon debut in 1859 and exhibited there successfully for several years. While in Paris, Tissot met and befriended the young James McNiell Whistler (1834-1903) and the Impressionist painter Edgar Degas (1834-1917).  In the 1860s, eager to see the world, the young painter traveled first to Italy and then to the England. In 1864 Tissot exhibited his first of many oil paintings at the Royal Academy in London. Around this time Tissot anglicized his Christian name to James Tissot; as much an entrepreneur as a painter, he most likely thought the name change would help him fit-in with the wealthy English patrons.

The Franco-Prussian war broke out in 1870; following the defeat of France and the occupation of Paris, Tissot fled to England where he had a number of contacts. His acquaintance Thomas Gibson Bowles (the founder, owner and editor of Vanity Fair) hired him to produce caricatures for his magazine, giving him an important entree into social and artistic circles. Tissot quickly became successful in London, where his oil paintings of social events and the prevailing fashion rapidly became popular. Having grown up around a father who was a linen draper and a mother who ran a successful millinery business, it was no surprise that Tissot had an acute awareness of the current fashion trends. In fact, Tissot was so preoccupied with elegant women and their elaborate dresses that his paintings provide extensive material for those who study costumes.

In 1872 Tissot began exhibiting regularly at the Royal Academy and continued to do so until 1881 (except for 1877-79). Tissot started to become a significant figure socially and in 1873 he purchased a house in St John’s Wood, a very affluent neighborhood outside of London.

In the mid 1870s Tissot met Kathleen Newton (1854-1882), an Irish divorcee with a dishonorable past; Newton had an affair with a man who was traveling to India to get married and became pregnant with his child. Dispute her history, Tissot was smitten with Kathleen Newton. She became his model, muse, mistress, and the great love of his life.  She was an extremely attractive young woman and, during this time, Tissot made her the dominant figure in many of his paintings. Unfortunately in the late 1870s her health started to decline; and in 1882 the desperately ill Kathleen committed suicide. One week after he buried his true love, Tissot left his home at St Johns Wood, and never returned. The house was later bought by Alma-Tadema.

Newton’s sudden death affected Tissot deeply and marked an important transition in his artistic development.  While working on one of the 15 large paintings for his 1885 his exhibition entitled Femme a Paris, Tissot claimed to have had a religious revelation. His religious experience led him to devote his remaining years to illustrating the Life of Christ and the Old Testament. Tissot felt impelled to depict the Palestine of Christ’s day and he made several trips to the Holy Land to do research. His series of 365 gouache illustrations for the Life of Christ (New York, Brooklyn Museum) were executed at the Chateau de Buillon, which he had inherited from his father. In 1888 the series was shown to enthusiastic crowds in Paris (1894 and 1895), London (1896) and New York (1898) and then toured North America until 1900. Tissot died in 1902 while living in the Château de Buillon.

Berthe’s pensive gaze suggests a budding sensuality; she appears to offer the viewer an invitation into her private world.  Prior to the invention of the cage crinoline in 1856, a well-brought-up lady was supposed to have eight layers of “refinement” – today we might call them simply  undergarments – which supposedly separated her from the outside world: her chemise, corset, corset-cover, crescent-shaped pad worn at the back of the waist and at least four petticoats. The very last layer, usually trimmed with lace, was the only layer that would be exposed to the public when climbing up the stairs or getting off a carriage. The display of any other undergarment along with exposed skin would suggest inappropriate behavior or an adventurously provocative woman.