This biography was written by Chris Pugsley and was first published in the Dictionary of New Zealand Biography Volume 3, 1996 – updated 5-Jun-2013

George Edmund Butler was born in Southampton, Hampshire, England, on 15 January 1872. In 1883 he emigrated with his parents, Joseph Cawte Butler and his wife, Jane Tiller, to New Zealand where his father established himself as a builder with premises in Cuba Street, Wellington. After completing his education at Te Aro School George worked for his father and studied art part time under James Nairn. He enrolled at the Wellington School of Design (later the Wellington Technical College) in 1890. In 1892 he joined the avant-garde Wellington Art Club, founded by Nairn, and established a local reputation for his seascapes.

In 1897 Butler went to Sydney with the Wellington art dealer McGregor Wright to study pictures in the National Art Gallery of New South Wales. He then decided to further his studies in art, and in 1898 worked his passage back to England in the stokehold of the Gothic. Butler studied at the Lambeth School of Art, and the Académie Julian in Paris, where he gained honours. He moved to the Antwerp academy, winning a gold medal and laurel wreath in 1900. On 29 April 1899 Butler married Sarah Jane Popplestone at Lyndhurst, Hampshire.

Butler returned to Wellington in 1900 and exhibited in Wellington and Christchurch art society exhibitions that year. In 1901 he settled in Dunedin and exhibited until 1905. It must have been a difficult time for Butler. He had a reputation gained from his studies in Europe and his paintings won praise at the Otago Art Society exhibitions, but life as a professional artist without private means gave little financial reward. He supported himself by giving tuition in drawing, and was commissioned to complete a number of portraits of city dignitaries.

In 1905, at the age of 33, George Butler returned to England seeking success on a larger stage. He settled in Bristol, taught art at Clifton College, established a reputation as a portrait and landscape artist in watercolours and oils, and was elected to the Royal West of England Academy in 1912. His work was exhibited ‘on the line’ at the Royal Academy of Arts, the Royal Scottish Academy and the Salon of the Société des artistes français. In 1916 ‘Supreme sacrifice’ was exhibited at the Royal Academy and sold for £450.

In August 1918 the newly formed New Zealand Expeditionary Force War Museum Committee approached Butler, as an expatriate New Zealand artist of reputation, about executing ‘a picture or pictures’ depicting the work of the NZEF. Butler agreed and was appointed official war artist with the honorary rank of captain in the NZEF on 16 September 1918. He joined the New Zealand Division in France in late September and remained there until late November, completing some 53 sketches and paintings. He carried a small sketch-book in which he made rough pencil sketches, often under fire, of actual operations and war scenes and based his finished works on these drawings. Butler was part of the New Zealand Division’s successful advance during the last two months of the war, and was fortunate not to be wounded when a delayed-action mine destroyed a barn he was sketching near Bapaume. After the armistice he visited and sketched all the New Zealand battlefields in Belgium and France.

The rapid return of the expeditionary force to New Zealand ended the War Museum Committee’s ambitious plans for London exhibitions similar to those mounted for Canadian and Australian war artists, and Butler was demobilised on 31 December 1918. Colonel R. Heaton Rhodes and Major General Sir Andrew Russell, the New Zealand divisional commander, privately commissioned Butler to complete a series of senior officer portraits and a number of large landscapes associated with New Zealand exploits on the western front. It was Heaton Rhodes’s intention to persuade the New Zealand government to purchase these works; if this was unsuccessful, he and Russell would meet the cost. Finally, in September 1921, the New Zealand cabinet approved payment including the purchase of a further two large works and 26 smaller paintings recommended by the New Zealand high commissioner in the United Kingdom, Sir James Allen.

Butler never returned to New Zealand. Following Sarah Butler’s death at Trimley, Suffolk, on 15 March 1928, he married Monica Susan Boyce at London on 29 April 1929. He died at Twickenham on 9 August 1936, survived by his second wife and two children of his first marriage.

Butler’s war paintings, held at National Archives, Wellington, capture the realities of war through a civilian’s eyes. They mirror the view of the New Zealand citizen soldier. There is no glory, only the stark depiction of waste and loss. They are an evocative indictment of war that have remained largely unseen by the New Zealand public. 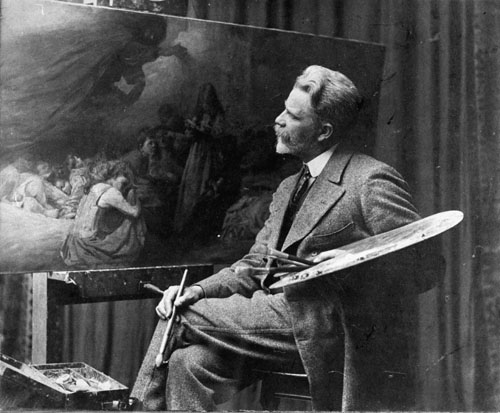 George Edmund Butler attempted for a time to make a living as a professional artist in New Zealand, but in 1905 was forced to go to England to further his career. Despite his contribution as an official war artist of the New Zealand Expeditionary Force in 1918, he remained an expatriate.