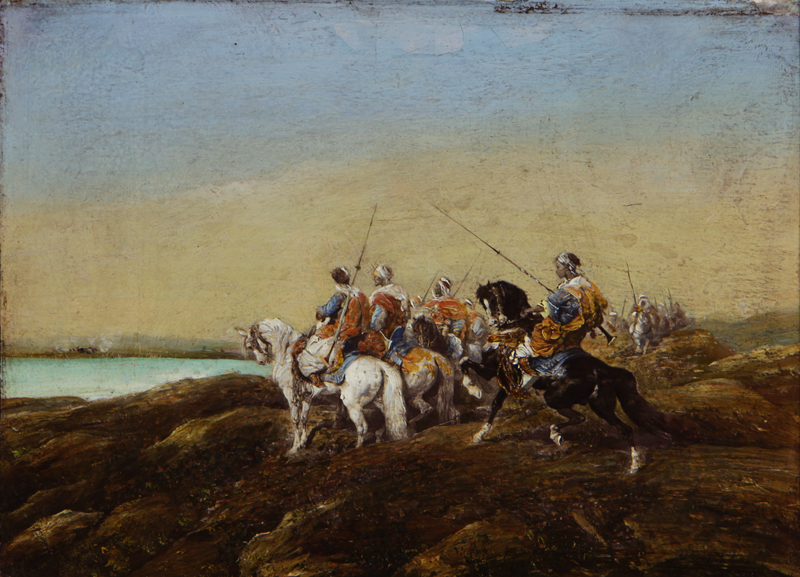 German born artist Adolf Schreyer is considered among the most successful Orientalist painters of his generation. Schreyer began his training in Germany, at the Städelsches Kunstinstitut and, at the urging of his teacher Jakob Becker (1810-1872), the Düsseldorf Academy. Later, he settled in Vienna, where he specialized in landscapes and military subjects, then much in demand. In 1855, after traveling to Turkey, Wallachia (a region in Romania), and southern Russia with the Prince of Thurn and Taxis, Schreyer accompanied the Prince’s regiment as an artist-reporter, assigned to cover the Crimean War (1854-7). By 1859, Schreyer had visited Syria and Egypt and, in 1861, Algeria. While in Algeria, Schreyer immersed himself in the local culture, learning several Arab dialects and riding with Bedouin horsemen.

When Schreyer moved to Paris in 1862, critics compared his paintings to Eugène Delacroix, Alexandre-Gabriel Decamps, and Eugène Fromentin. At the height of his career he was a favorite with both the German aristocracy and America’s wealthiest families, including the Astors, Morgans, Rockefellers, and Vanderbilts; and today, his paintings can be found in important art collections throughout the world. Schreyer exhibited his paintings of Arab horseman at the Paris Salon and exhibitions across Europe, receiving medals in 1864, 1865, 1867, and 1876.

Schreyer’s technique is vastly different from the tightly painted, intensely detailed canvases of his German and Austro-Hungarian colleagues. Walking the line between impressionism and realism, Schreyer avoids the intrusive, ethnographic, and distinctly late-nineteenth-century approach of many of his European colleagues. And perhaps this, along with the compelling humanity of his endless stream of horsemen, is why Schreyers Algerian subjects remain so highly prized today.

Arab Warriors on Horseback is characteristic of Schreyer’s mature Orientalist work. Though there is no indication as to the identity of these Arab figures, or where the scene is set, history provides a possible clue — the magnificent detail of the costumes on each of the Arab riders suggest that they are spahis, or local Algerian men. In 1871, compelled by religion and nationalist sentiment, 100,000 Algerian tribesmen had waged war on the occupying French forces. As Schreyer’s determined riders pause and gaze over their Empire, they appear to be heading to the fight. Perhaps Schreyer is speaking  to the Arabs he once traveled among – maybe, despite his French connection, even encouraging their political success.

Schreyer continues to be a favorite among European and American collectors, admired for his excellent equine draughtsmanship and elaborately dressed Arab figures. The Metropolitan Museum, New York, owns three of Schreyer’s oriental paintings: Abandoned,  Arabs on the March, and Arabs making a detour; and many of his best pictures are in the Rockefeller, Vanderbilt, J. J. Astor, W. Astor, A. Belmont, and W. Walters collections. Schreyer paintings can be found in museums and private collections throughout the world, including Berlin, Hamburg, Frankfort, Paris., and New York.