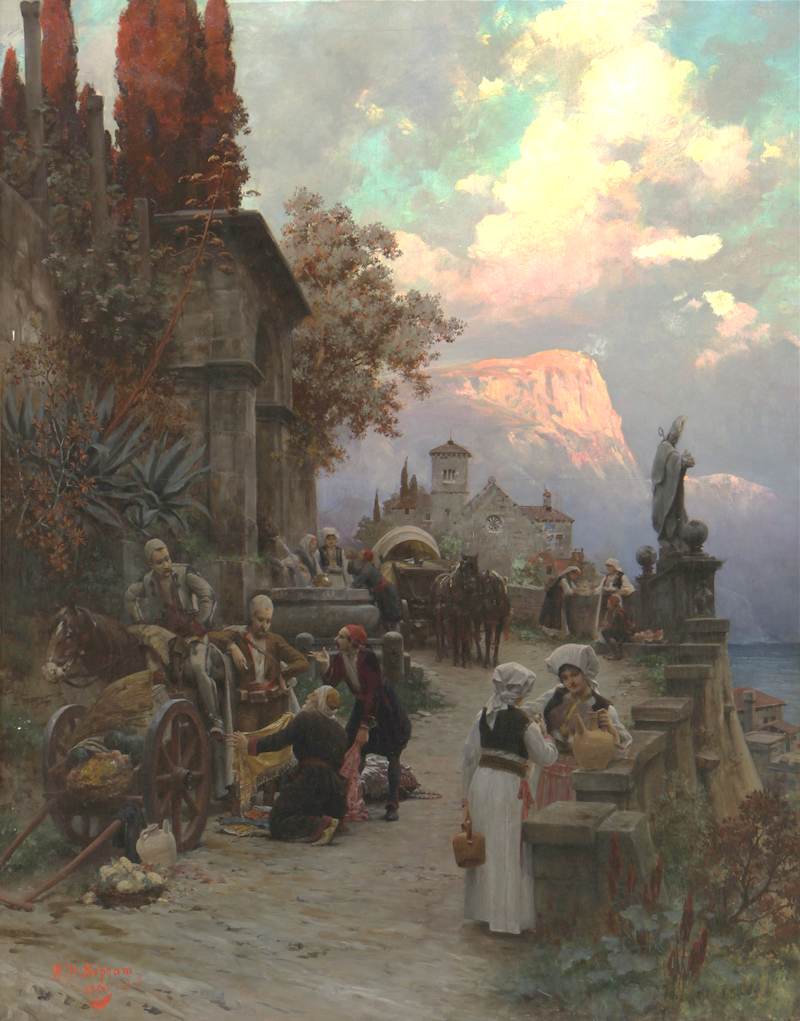 Alois Hans Schram, born in Vienna in 1864, was a sculptor and prolific painter of historical subjects, landscapes, and portraits. Schram studied at the Art Academy in Vienna under Griepenker, J.M. Trenkwaldl and Hans Makart. During his career he received multiple awards and honorable mentions. He won three State Prizes, and in 1889 he was awarded a two-year scholarship to travel and study in Rome.

In 1890, the year Approach to Palermo was painted, Schram became a member of the Kuenstlerhaus Artist Union in Vienna. He returned to Vienna in 1891, and in 1892 he received a second place silver medal. He began to travel again in 1893, this time to France, England, Spain, Sicily, Greece, Egypt and Syria. In 1902 he was awarded “The Carl Erzherzog Award” and in 1908 he won the State Gold Medal.

Schram’s Fischer van Erlach explains the model of the Karl Church to Emperor Karl VI, originally intended for the festival room at Vienna City Hall, was featured at the Jubilee Church and exhibited in 1908 at the House of Artists in Vienna. In 1911 he produced a one hundred meter frieze on the stairway at the Viennese Parliament; known as Benefits of Peace, the allegorical depiction celebrates peace, civic virtues and patriotism. Other notable images by Schram include Apotheosis of the House of Habsburg, which is in the new Hofburg Palace, and the Empress Maria Theresia, which was painted for the Palace of the Council of Presidential Ministers, once located on Vienna’s famed Lord’s Lane. Schram also decorated the interiors of the famed Frankel Palace with Leopold Burger.

Schram’s artworks can be found in museums and private collections around the world.