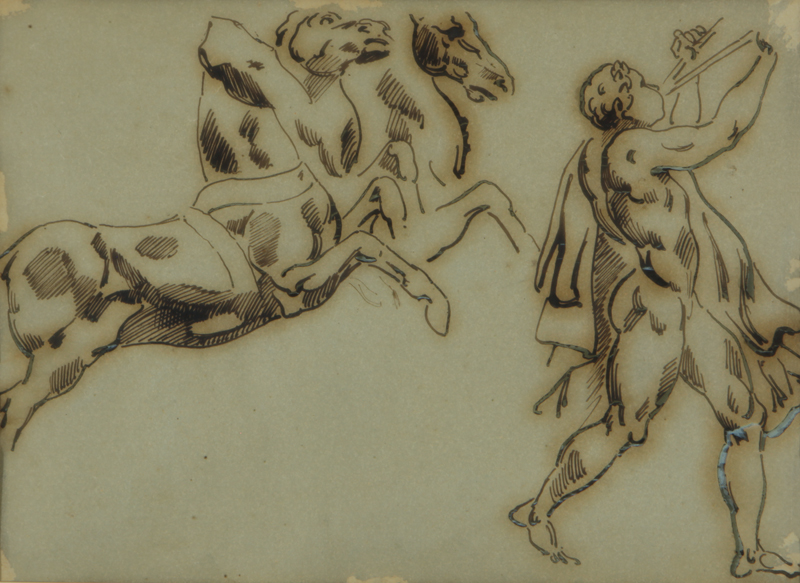 Ferdinand Victor Eugène Delacroix, most commonly referred to as Eugène Delacroix, is considered the leader of the French Romantic School. Taking inspiration from Peter Paul Rubens and the Venetian Renaissance artists, he emphasized color and movement, rather than clarity of outline and Neoclassic perfectionism. Delacroix’s use of expressive brushstrokes and vivid colors profoundly shaped the work of the Impressionists.

Delacroix was an extremely prolific artist, producing over 9,000 paintings, watercolors, pastels and drawings during his lifetime, many of which were inspired by the works of Shakespeare, Goethe, and Byron. His most widely known piece is Liberty Leading the Republic (1830), which invoked the image of liberty leading the people to freedom. The French government bought the painting, but officials deemed it too inflammatory and removed it from public view. Nonetheless, Delacroix still received many government commissions for murals and ceiling paintings. Following the Revolution of 1848, which ended the reign of King Louis Philippe, Delacroix’s painting was finally put back on display. For years the painting hung in the Louvre in Paris.

In 1832, Delacroix traveled to Spain and North Africa to escape the Paris civilization and in hope of seeing a more primitive culture. Entranced by the people and the costumes, he produced over 100 Orientalist paintings and drawings based on the life of the people of North Africa.

Delacroix’s passion for the exotic inspired the nineteenth-century Symbolist art movement, and the abundance of equine imagery in Delacroix’s paintings is a visual affirmation of the symbolic importance of the horse in nineteenth-century Romanticism. The writings in his journal record his Romantic inclination towards the horse, often comparing the character of the animal to qualities found in nature: at times fearful in its power and violence, while beautiful and awe-inspiring in its form and motion. Entry upon entry he notes his keen interest in perfecting his pictorial representations of the horse: “I see some progress in my study of horses.” *  and  “I must absolutely begin to draw horses. I must go to the stables every morning…” *
*  Journal of Delacroix (Arts & Letters) by Hubert Wellington