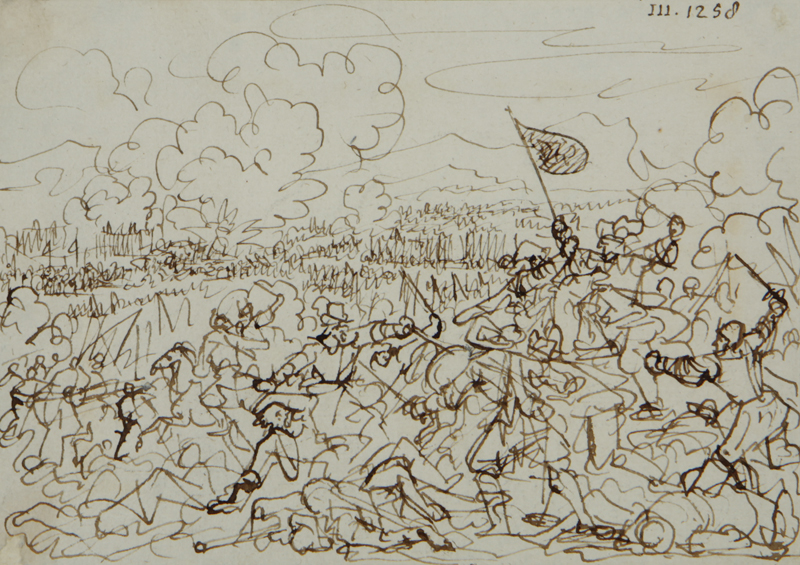 Jan (Johannes) Luyken (Luiken) was a seventeenth-century Dutch poet, illustrator and engraver. He was born in Amsterdam in 1649 and learned engraving from his father and teacher Caspar (Kaspar) Luyken. He married at nineteen and had several children. One of his children, Caspar (Kasparusor or Caspaares) Luyken (Luiken), also became a renowned engraver.  When he was 26 years old, Jan Luyken had a religious experience, which inspired him to lead a robust life as a Baptist and write moralistic poetry; his first book of poetry was called Duytse lyre (1671).

He made his name as an ingenious etcher in 1680, with 24 illustrations in Oorsprongk, a popular history book by the renowned Dutch historian Pieter Bor. Jan Luyken is also known for his moralistic prints and etchings about the suffering of the Christian martyrs. He illustrated the 1685 edition of the Martyrs Mirror, an account of martyrs from the 1st — 16th century, written by Thieleman Van Braght, with 104 copper etchings. These had been considered lost, but were found in 1924. A collection of these prints appears on this website: http://cargocollective.com/Kunstkabinett/Religious-Persecutions-by-Jan-Luyken

Jan Luyken and his son Caspar also published Het Menselyk Bedryf (“The Book of Trades”) in 1694, which contains engravings of seventeenth-century trades; each engraving is accompanied by a short verse, presumably describing the particular trade.

His works can be found at the Amsterdam Museum and the Rijksmuseum Amsterdam, commonly called Rijksmuseum, the largest and most important national museum of the Netherlands.

Luiken Engravings on Silver Medals can be found on: 24carat.co.uk/dutchmedallionsjohannescaspaaresluiken.html