A Fine Piece of Cloth or The Bargain Brabent Women
You are here: Home / 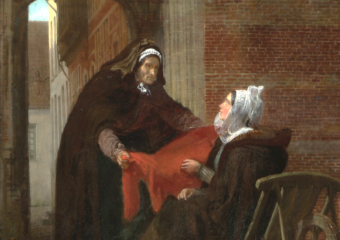 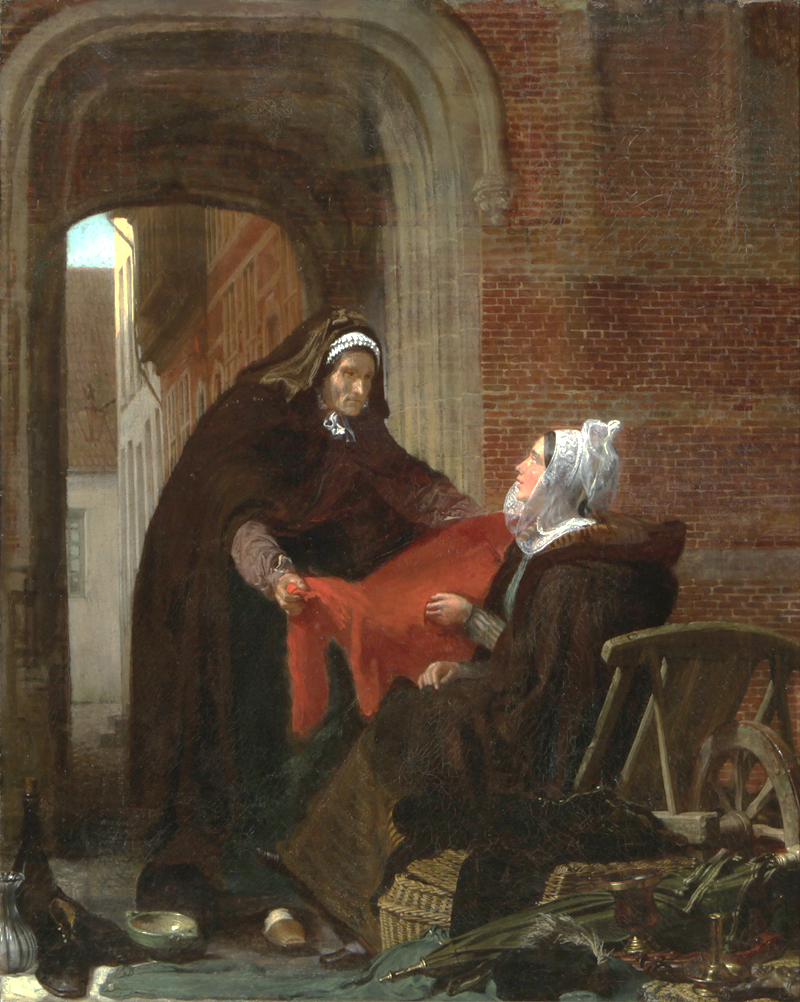 Born in Dronrijp, the Netherlands, and trained at the Royal Academy of Antwerp, Belgium, he settled in England in 1870 and spent the rest of his life there. A classical-subject painter, he became famous for his depictions of the luxury and decadence of the Roman Empire, with languorous figures set in fabulous marbled interiors or against a backdrop of dazzling blue Mediterranean Sea and sky.

Though admired during his lifetime for his draftsmanship and depictions of Classical antiquity, his work fell into disrepute after his death, and only since the 1960s has it been reevaluated for its importance within nineteenth-century English art. 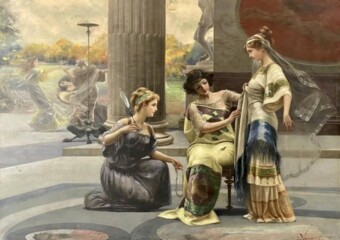 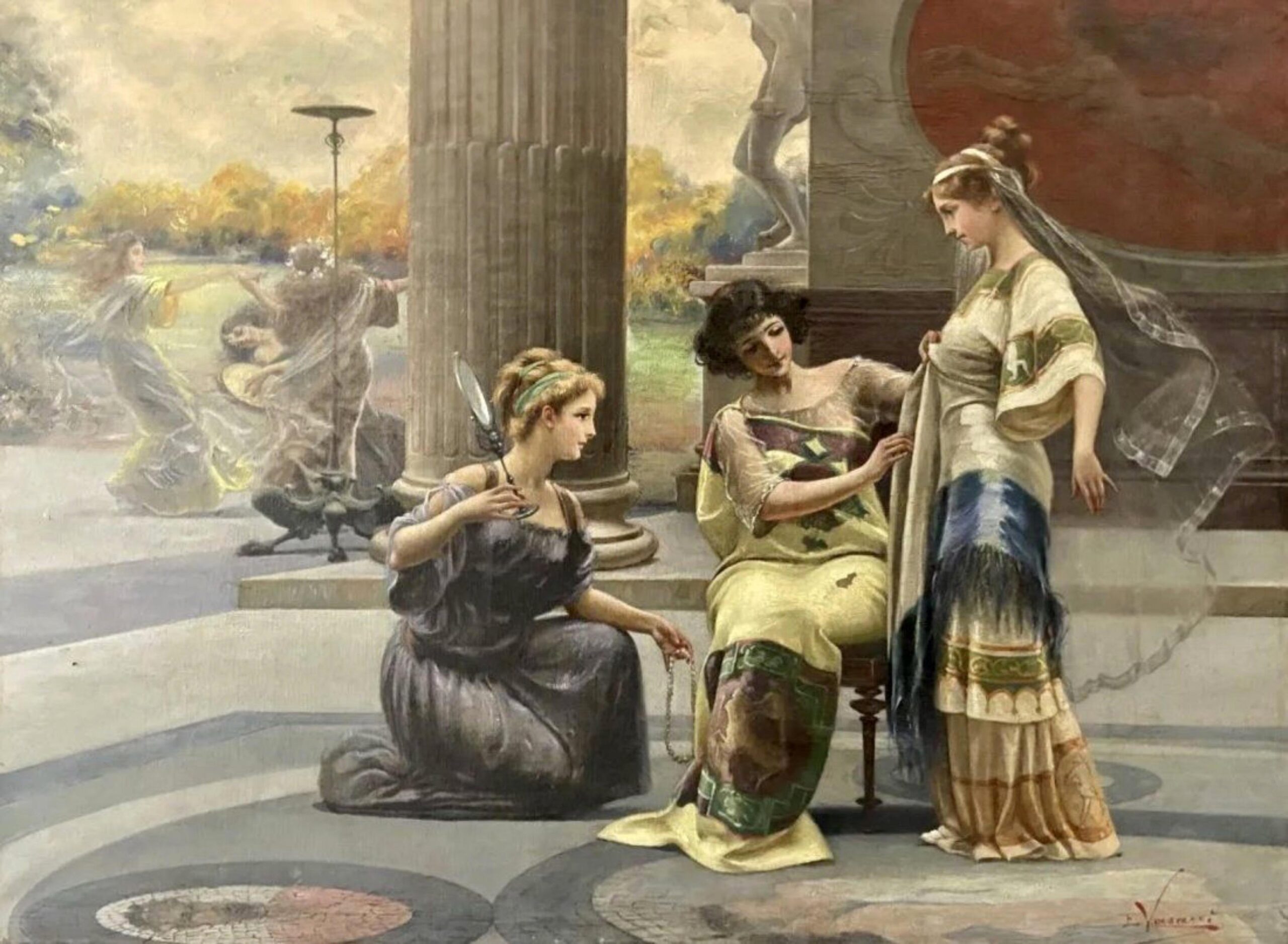 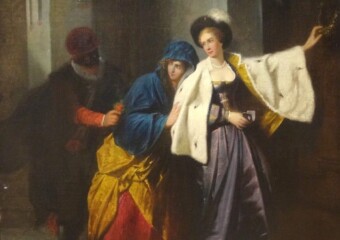 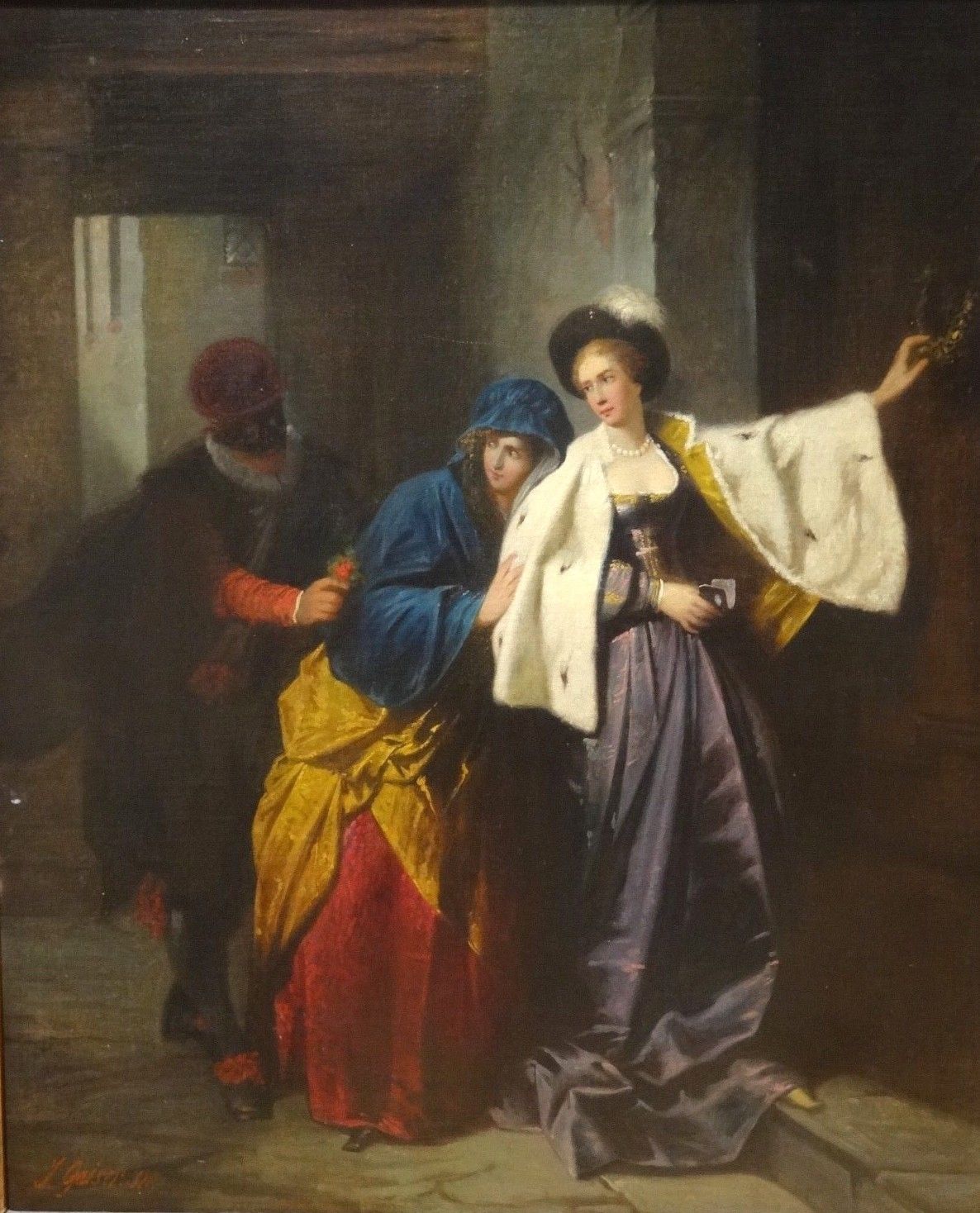 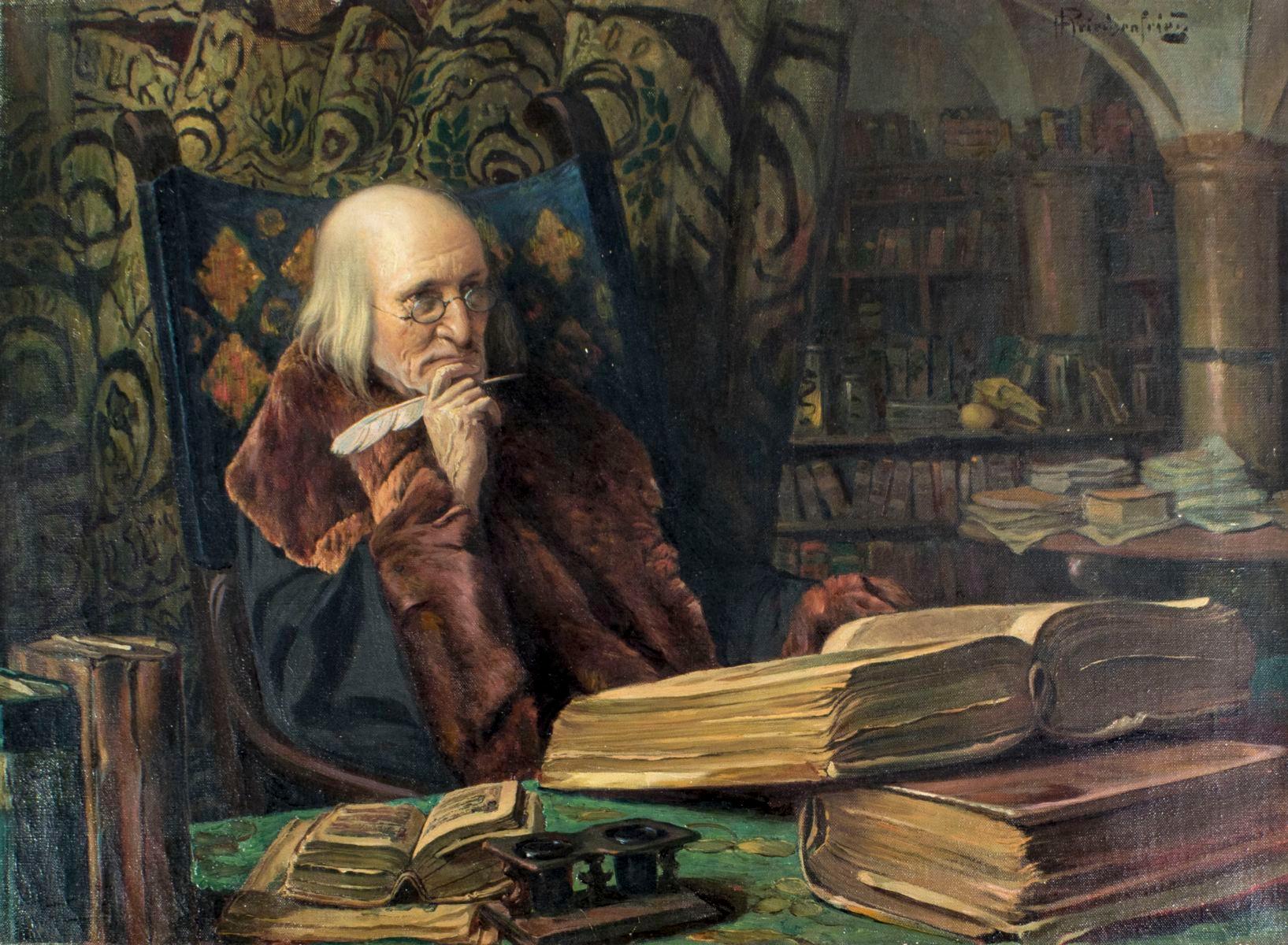 Alois Heinrich Priechenfried was born June 25, 1867 in Vienna, parish Gumpendorf, and died March 24, 1953 in Vienna. He was an Austrian portrait painter of naturalism and also was trained as a gilder.

In his time, he received high recognition for his portraits of rabbis.Priechenfried worked from the year 1881 as a gilder in the company of his father, Alois Michael Priechenfried. A Catholic, he completed his artistic training as a guest student from 1884 to 1885 at the Vienna Academy of Fine Arts under Professor Christian Griepenkerl.After several stays in Munich, he lived until his death at Kauerhof in Diefenbachgasse 12 in the 15th district of Vienna.

On June 28, 1896 Alois Heinrich Priechenfried was granted the citizenship of the city of Vienna. Alois Heinrich Priechenfried was registered on April 22, 1902 as a member of the Management Board with statutory corporate rights at the company Werks- und Rohstoffegenossenschaft der Vergolder Wien.Together with his wife Emilie Amelia Priechenfried, the painter had eight children. At the age of 73, the couple celebrated the golden wedding in the Eisenbahnerheim in Vienna. 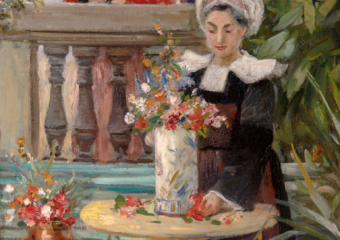 Margherita Pillini was an Italian painter, active mainly in the late 19th century in Turin and Paris.

Pillini was born in Lombardy and married painter Marco Pillini. For many years, she was a resident of Paris. She exhibited in 1883 at Rome: Stracciaiolo di Quimper or Stracciajuolo di Quinper (“Silk-cocoon Carder of Quimper”) and Charity; in 1884 at Turin, in 1884: Three ages; Blind Poorman; Portrait del Prince of Naples; and another del vero genre painting.

De Rengis in his criticism of the “Silk-cocoon Carder of Quimper” said: “If I am not mistaken, Signora Margherita Pillini has also taken this road, full of modernity, but not free from great danger. Her ‘ Silk-cocoon Carder’ is touched with great disdain for every suggestion of the old school. Rare worth—if worth it is—that a young woman should be carried by natural inclination into such care for detail. This method of painting, opposed to solid colors, desires to be seen from a distance, leaving the eye with an infinite wish for peace.” 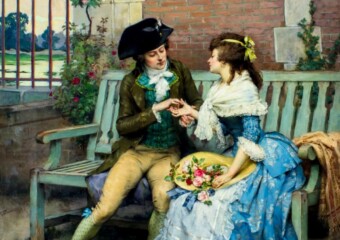 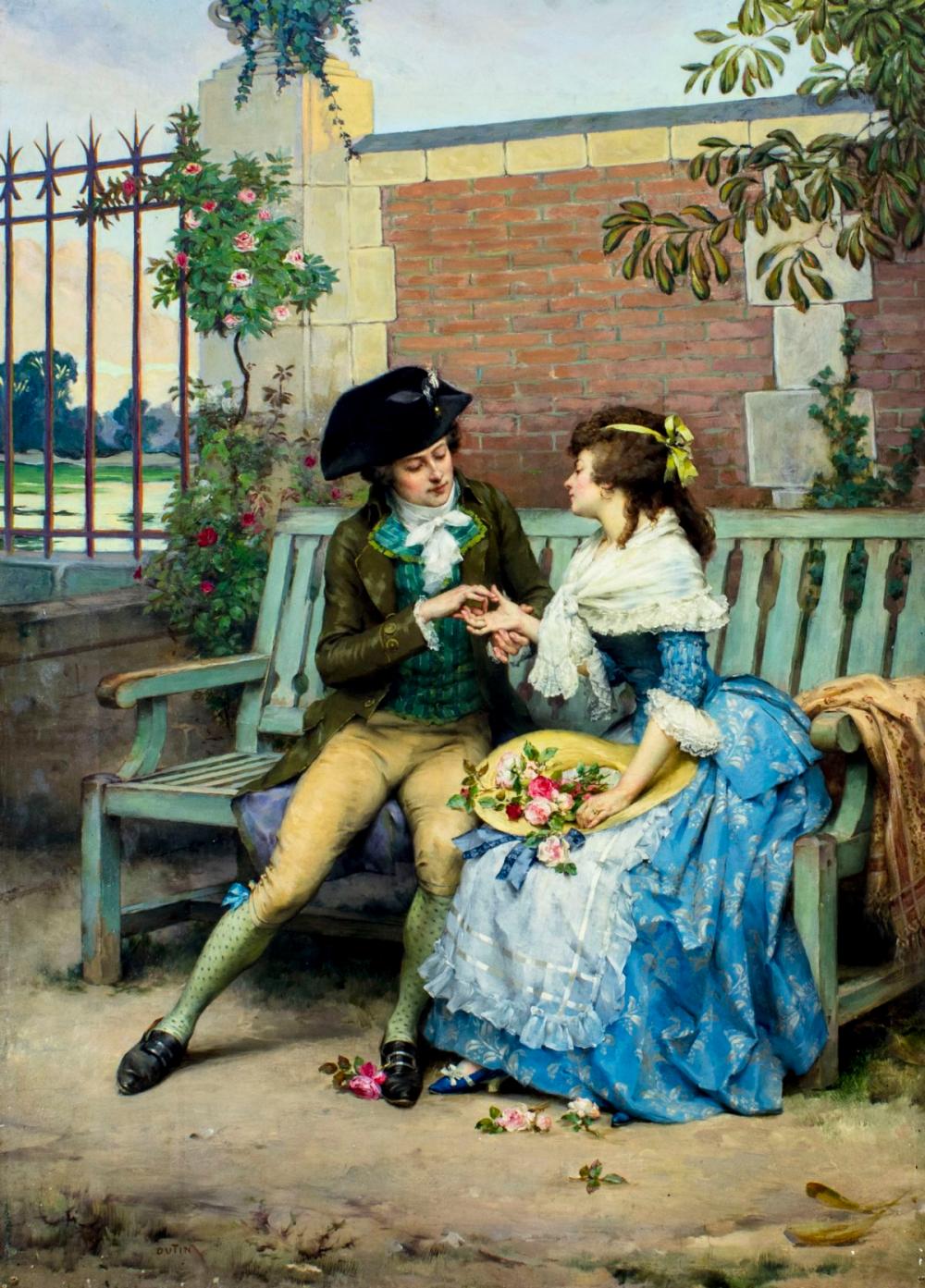 Pierre Outin’s father is a wealthy trader that does not approve his son’s taste for art and drawing. Outin’s inclination for art begins at the Moulins high school where he learns drawing. His father wants him “back on track” and send him working in England. He is still under 18 at his return in Paris and is soon hired in a silk trade, to his father’s satisfaction. Outin gets emancipated in 1861 and decides to quit his job.

Thanks to family friend sculptor Charles Joseph Lecointe, the young man is accepted at the Cabanel’s studio. Outin turns out to be a very gifted pupil, and he wins the competition first prize at the Fine Art School in 1863.From 1868 he suggest his first oil work to the Salon of French Art.

His first paintings soon indicate his taste for genre scenes with historical connotation. From this moment, he becomes a Salon’s regular. The young artist stays a long period of time in Algeria in 1874. Outin is mesmerized by the African land, its cities colors, its luminosity spreading all over the streets and the oriental clothes. The surroundings are a change of scene for Outin and this strongly influences his work even after his return: we find a palette with richer and lighter shades.

Like many artists of his generation, he frequented the Nouvelle Athenes cafe and associates there with Manet, Pissaro and Goeneutte. In the context of the Paris Siege and the Commune, Outin settles in Auvers sur Oise with some of his friends. While being there, he paints the portrait of his painter friend Eugene Murer. During the 1880 Salon his painting “Autumn Race” is, according to art critic Maurice du Seigneur the “the work that moist attracted visitors”. From then on, the artist walks off with medals and mentions until his famous and unrivalled painting “The Battle of Quiberon Bay” in 1889. He wins the same year the Honorable mention for his “Filial Piety”.

Most of his works are purchased during his lifetime by art dealers Goupil and Valadon as well as English, American and German dealers. The painter’s favorite themes are historical scenes, romantic genre scenes and a couple of orientalist works. The later paintings are directly stemmed from his long stay in Algeria. His orientalist works are gracious and elegant, and one can find the entire talent of Outin as a draughtsman and colorist. His rich and subtle palette brilliantly brings out the warm atmosphere of Orient as well as the subject’s clothes and cities architecture. 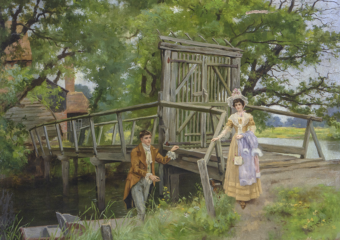 John Shirley-Fox R.B.A. He was an English painter, author and collector/scholar of coins. Born in 1860, he lived in London and was educated in Paris in Bouguereau’s Atelier at the Academie Julian. In his youth he exhibited in the Salon de la Societé des Arts between 1887 and 1889. Primarily a portrait painter he also worked outdoors in the English Barbizon style.

In 1890 he moved back to London and had a number of exhibitions in the Society of British Artists and the New Gallery between 1895 and 1904. A typically elegant portrait of the Australian beauty Miss Evelyn Gayre was incorporated into the private gallery of the Queen of England in 1914. 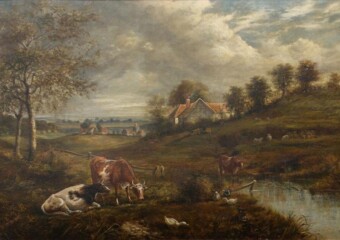 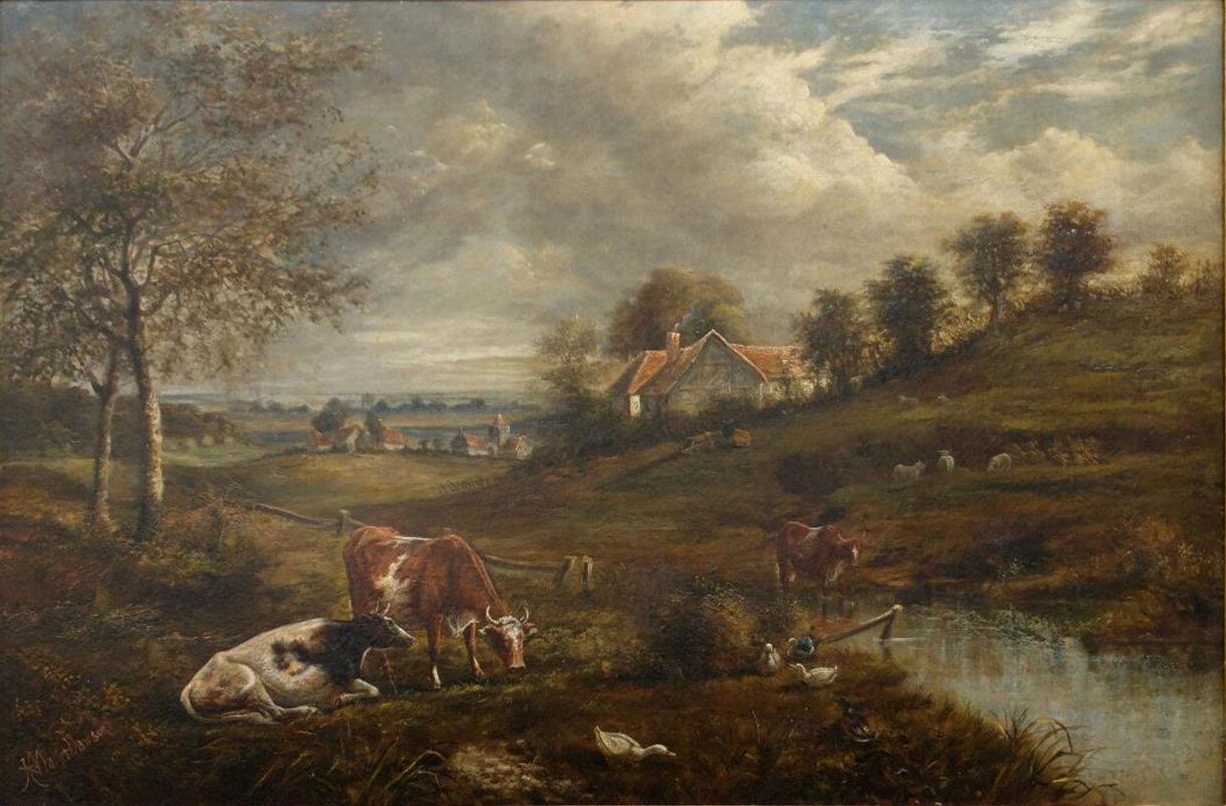 Elliot Daingerfield is considered one of North Carolina’s most prolific artists. Elliot was born in Harpers Ferry, West Virginia, and raised in Fayetteville, North Carolina. At 21 he moved to New York to study art.

Elliot was inspired by the European Symbolist movement during his time overseas. Elliot’s influences included Impressionism and Romanticism in general to include the artist Ralph Albert Blakelock.

Daingerfield’s first exhibit was at the National Academy of Design in 1880, and after studying in Europe c.1897, The Lady Chapel of the Church of St. Mary, The Virgin in New York City in 1902. In 1971, the North Carolina Museum of Art displayed 200 of Daingerfield’s paintings; the museum currently displays “Grand Canyon” and “Evening Glow.”

Elliot Daingerfield is buried in Cross Creek Cemetery at Fayetteville. 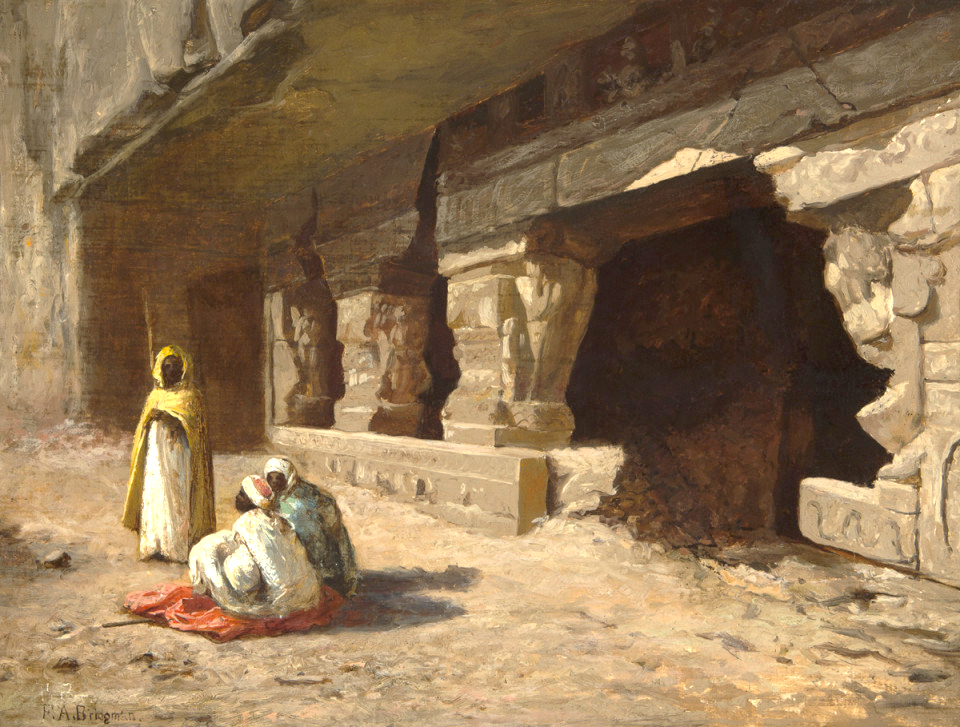 Frederick Arthur Bridgman was born in Alabama but came from a family with Northern roots which prompted the family back to Boston. The young Bridgman enrolled in art school in Brooklyn and showed formidable talent at the yearly exhibitions.

He felt the call of Europe early on and in 1866 he set off for France. Bridgman arrived in Paris in 1866, entering the studio of Gerome at the Ecole des Beaux-Arts. After a trip to Algeria and Egypt in 1872 he turned his attention to North African subjects, emulating his master’s precise and colorful manner.

Throughout his career, Bridgman’s primary concern was to depict the contemporary life of the natives and delve into their customs. He befriended many North Africans during the years he visited their countries and he became America’s preeminent Orientalist painter.