Passion for the Arts
You are here: Home / About / The Knohls 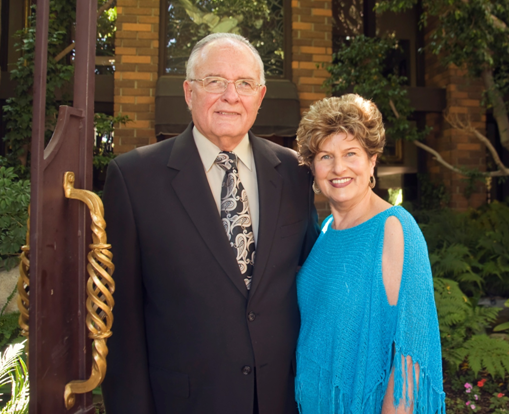 Howard and Linda Knohl are among the world’s most respected private art collectors and their story is as captivating and inspiring as the masterpieces that fill the halls and walls of Fox Pointe Manor, the name of their home in Southern California.

Howard and Linda were both born and raised in New York City during the end of the Great Depression.  Their working class families struggled to survive during these challenging years – it was this struggle that impressed upon them the importance of family and instilled in them the ethos of hard work and determination.

Although both shared similar childhood experiences, it wasn’t until 1960, while Howard was studying at New York Medical College, that he met Linda, a young and vibrant undergraduate at Brooklyn College, Howard’s alma mater. It was love at first sight. Less than one year later, penniless, but hopelessly in love, they married and moved into a one-room apartment in the heart of Brooklyn. For six years they lived frugally and focused on their growing family.

In 1967, Howard and Linda, and their two young children, experienced sudden upheaval. Howard was drafted and the family was sent to El Paso, Texas. The following year their resilience was severely tested. Howard was sent to serve in Vietnam, leaving Linda alone in Texas to care for their children.

When Howard returned to the United States, the couple decided, rather than move back to their native New York, they would relocate their family to California. The Knohls arrived in Southern California in 1969 and purchased their first home in Los Alamitos. It was here that they expanded their family again, adding two more children to the mix. Dr. Knohl began to establish himself as a leading radiologist, while Linda worked as an interior designer. With fewer financial constraints, Linda and Howard started to travel throughout the United States and Europe. They explored museums and galleries, enjoyed theatrical and musical performances, and formed a deep appreciation for history, world cultures, and all forms of art.

In the fall of 1976 the Knohls moved into their current home in Anaheim Hills, and for years their walls and halls stood empty. It wasn’t until the mid-1980s, when Howard was gifted a rare first-edition book, that his passion for collecting was unleashed. Captivated by the illustrations, text, and typography, he began to collect English language first editions printed before the year 1700. His anthology of historical text, now over 4,000 titles, fills several libraries in the house and is believed to be the largest privately owned collection of it’s kind.

While accumulating rare books, the Knohls began to purchase art from the 15th through the 19th century. In an attempt to integrate the two collections, they selected paintings that depicted themes and scenes from the antiquarian volumes that lined their shelves. Currently, the Knohl home is decorated with over 260 canvases, a collection that spans genres, generations, and geographic boundaries.

Over the years the collection has expanded to include richly carved ivory pieces, beautiful bronze statues, and ornate clocks from all over Europe and the United States. In the mid-1990’s pocket match safes (small containers used to safely hold early friction matches) became a central focus of their collection, both for the historical value as well as in appreciation of their beauty.  With more than 21,000 pieces, it is currently the largest known accumulation of match safes existing in the world.

In the last ten years the Knohl’s have added several other art forms to the collection, including gilded cobalt demitasse cup and saucer sets from the 17th through the 19th centuries, rare and exquisite 19th century cheroot cases (small hand-painted cigar cases), and yads (Torah pointers) from every continent.  They have also accumulated over 40,000 pieces of large format sheet music. In addition to the intrinsic value of the music itself, detailed illustrations by well-known artists enhance many of the covers. Most recently walking canes from around the world sparked Howard’s interest. The Knohl’s compilation of canes currently totals more than 500, a splendid collection that combines ingenuity and beauty with historical significance.

Howard and Linda Knohl’s passion for the arts extends well beyond collecting. For over fifteen years they have dedicated themselves to bringing world-class musical theater to their community and increasing the awareness of and the appreciation for all forms of art. Linda is currently the president of the Anaheim Performing Arts Center Foundation (APACF), whose mission is to build and maintain a preforming arts venue in the city of Anaheim. Howard and Linda are both committed to helping broaden the art world in Orange County, California and eager to share their constantly growing art collection with a world audience.